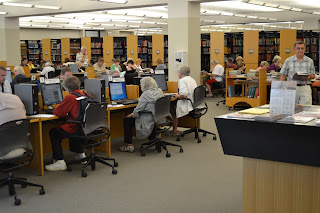 Why would one visit Indiana if they are preparing to go to New England to conduct research? Why wouldn't one wait until she got there to do New England research?  The answer is because the Kalamazoo Valley Genealogical Society(KVGS) was taking a bus trip to the Allen County Public Library's (ACPL) Genealogy Center.  KVGS invited my local genealogical society, Calhoun County Genealogical Society and even offered a pick up in Marshall, Michigan.

I thought this would be a wonderful way to go to the genealogy center and get a little research done that would save me time when I get to New England.  I couldn't see using time at libraries in New England if I could conduct the research closer to home.  I figured it would give me time to research items that I don't have access to here.

So, I went and I had a great time.  I had a list of resources (seven pages) that I had prepared by using the Genealogy Center's website.  One of the problems I have is when I go to ACPL I feel I need to take advantage of their resources and I research all over the place.  This time I narrowed my research down to two research questions and using the Fold 3 database at the library:


I thought if I just concentrated on these three things I would be focused on my research. Hah! Have you ever been to Allen County's Genealogy Center?  It is hard to stay focused.  First, you find what you thought you wanted on the shelf and next to it are three more books that look interesting.  Next, you find what you want and it takes you in another direction than you thought you would be going. These aren't bad things, they are just bright shiny objects that distract me.

I did pretty good, I think.  The library has carts that patrons can use to bring multiple books back to the table to look through.  I had a lead that the Fenn family may have come from the Litchfield area of Connecticut and decided to pursue that lead, so the morning was spent with mostly Connecticut records.  I had two and a half shelves of the cart full.  I looked at early census records and early settlers of CT. I spent a lot of time with the Master Index to Early Connecticut marriages.  There are seven volumes of marriages.  The problem I have is just looking at one or two surnames.  I figure if I have the book in my hands I might as well check other surnames.  I had nine surnames in Connecticut to look for and found eight of the nine.

I decided I better stick with the Fenn surname and looked at early Connecticut probate records next. Of course, I found my Rowley family and had to make copies of that.  The History of Litchfield, Connecticut looked interesting, but I decided to see if that was available online, which it is, so I just made copies of the Fenn names and pages in the index.

Next, I wandered into church records.  This was a blind search on my part as I wasn't sure which church they belonged to at the time, but the records were available and I checked.  It was a negative search, but at least I know to keep looking.

I used my Flip Pal scanner and scanned lots of pages to look at and analyze when I got home.  I had gone through my cart and decided to load up a second time.  This time I wanted to look at two books that would help me once I got to the New England Historic Genealogical Society library: 1) Manuscripts at the New England Historic Genealogical Society and 2) Guides to Diaries in the R. Stanton Avery Collection, on to the cart they went.  Next, I decided to spend some time with Vermont records.  Huldah Rowley's father, Hopkins Rowley, was a member of Ethan Allen's Green Mountain Boys, and I thought I would use a few resources to look into that further.  Other Vermont records I checked were rosters of soldiers in the war of 1812 for Vermont, Migrations from Vermont, Vermont families in 1791, and probate extracts.  I found Daniel Fenn in a few of these, but nothing that furthered my research into his parentage.

It was time for lunch!  I was back at it after lunch.  I decided to shift focus and use the Fold 3 database that is available at the library.  I had taken my own computer and could hook into their databases on it. I found information on all four people I was looking for.  I can't wait until the Preserve the Pension project uploads the "P" pension files, as William Powers received a pension.

I ended the day by looking at periodicals.  I had used PERSI before my visit to the library and had a few articles I wanted to find.  The ones I used were Connecticut Nutmeggar, Colonial Genealogist, Americana, and Connecticut Ancestry.  I finished a half hour before the bus was due to pick us up and so I went outside and got some fresh air and waited for the bus.

Two carts full of resources, not a bad day.  I did miss my research assistant, Kirk, when he goes he gets the materials and I can research.  I had more positive searches than negative ones and I think narrowing my research down helped me focus better than I have in the past. I used the report feature in Roots Magic, which helped as well. 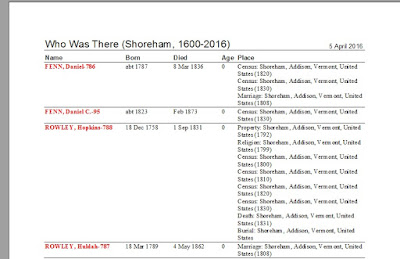 "Who Was There" Roots Magic Report for Shoreham

One of the reports I ran before I went to ACPL was the "Who Was There" report in my Roots Magic software program.  The "Who Was There" report is wonderful.  It lets you create a list of people who were in a certain place at a certain time.  It is found under reports, either all reports or lists. A pop up menu lets you fill in the search parameters that you are looking for.  The one above I just put Shoreham in the space for "Find people who may have lived in this place" I used a date range of 1600-2016 for the "On this date (or during this time period)".  You can filter by people to include and minimum and maximum age.  The report above is an example of what is generated.

I made reports by state, mainly New England, for my visit to ACPL:  Connecticut, Massachusetts, New Hampshire, New York, and Vermont.  I figured the reports would come in handy when I go to New England.

I am still processing the information that I found at ACPL.  Although I wasn't able to answer my two research questions, I found information that helped.  I think the clue to Daniel Fenn's parents may lie in Connecticut and Vermont records.

I am looking forward to my New England research trip and the information I found at ACPL will help me once I get to New England.  ACPL is a wonderful research repository and if you ever have a change to go there, you should.  Just don't blame me when you get sidetracked by all the information that is available there.

Posted by Brenda Leyndyke at 7:15 AM