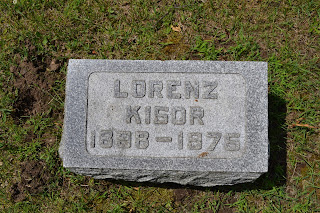 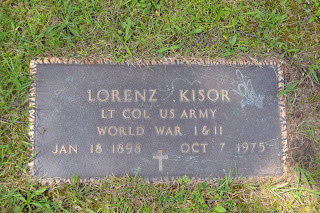 My husband and I traveled to Ypsilanti, Michigan and visited Highland Cemetery, 943 N River Street, Ypsilanti, Michigan.  I was looking for my Glover family who is buried there. The plot next to the Glover plot is the Blodget plot and in the margin of the two plots I found Lorenz Kisor. Lorenz Kisor married Natalie Glover, the daughter of Hal Willis Glover and Annie Overton Crary, 28 December 1929 in Ypsilanti.

Lorenz Kisor has two tombstones; one regular one and one military.  Lorenz Kisor retired as a Lt. Colonel in the United States Army and served during World War I and II.  His military stone states his birth date as 18 January 1898 and his death as 7 October 1975.

The card below was obtained from the Highland Cemetery office, which by the way, has an incredible staff.  Tina helped me and made copies of the burial cards.  Lorenz Kisor and his wife, Natalie, are buried near her parents, Hal and Annie Glover.  The owner of the plot, Amos C. Blodget would be Natalie Glover Kisor's great uncle. 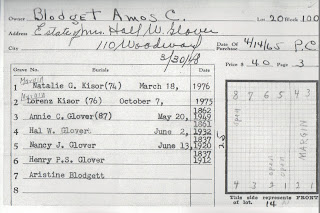 If you haven't stopped at the cemetery office when you are looking for ancestor's gravesite, you must. The records I received from the office were very helpful, especially when some of the headstones were unreadable.
Posted by Brenda Leyndyke at 6:57 AM