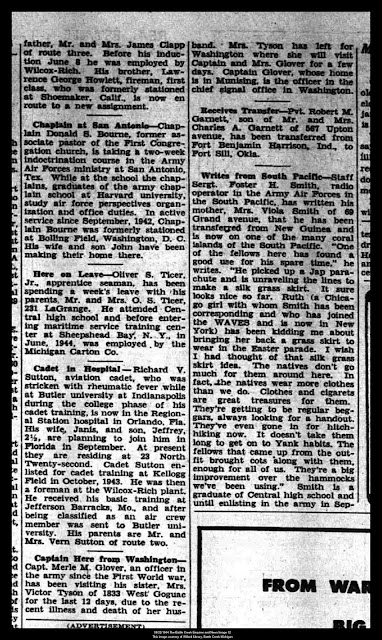 During World War II, the Battle Creek Enquirer, Battle Creek, Michigan ran a "News of our Men in the Services" series.  It was here that I found news about my Granduncle, Merle McKinley Glover, the son of Frank H. Glover and Hattie Fenn Glover.

Merle was in World War I and served during World War II, also.  The above article is about his visit to his sister, Adeline Glover Tyson, who lived in Battle Creek at the time.

Transcription:Captain Here from WashingtonCapt. Merle M Glover, an officer in the Army since the First World war, has been visiting his sister Mrs. Victor Tyson of 1833 West Goguac for the last 12 days, due to the recent illness and death of her husband.  Mrs. Tyson has left for Washington where she will visit Captain and Mrs. Glover for a few days. Captain Glover, whose home is in Munising, is the officer in the chief signal office in Washington.

I keep saying I don't have any ancestors in Battle Creek and then I find an article like this.  I guess I need to quit saying this.  The above article has provided information that will help me research Merle's military history further.
Posted by Brenda Leyndyke at 7:15 AM