My grandfather, Harry Glover, died 6 September 1950 at Grace Hospital NWB, Detroit, Wayne, Michigan. He was 67 years old.  Grandpa Glover died before I born. I have come to know him through my dad.  Harry Glover died the night before my dad's, his son, first day of teaching.  My dad was getting ready to go to school when the superintendent came to his house to inform him of the news. How sad to have to start your first teaching experience with the news of your father's death. My father left to meet his mother in Marquette, Michigan for the funeral and burial.

I found one death notice and two obituaries for Harry Glover.  Harry Glover was his birth name, but sometimes went by the name of Frank H. Glover, Jr.  I don't know where the Frances Henry Glover came from.  I would be interested to know who wrote the obituary using that name.  It states he was born in Grand Rapids, which is inaccurate.  Harry Glover was born in Jackson, Michigan on 6 May 1883. 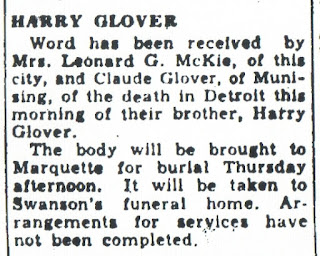 Harry Glover
Word has been received by Mrs. Leonard G. McKie, of this city, and Claude Glover, of Munising, of the death in Detroit this morning of their brother, Harry Glover.

The body will be brought to Marquette for burial Thursday afternoon.  It will be taken to Swanson's funeral home.  Arrangements for service have not been completed. 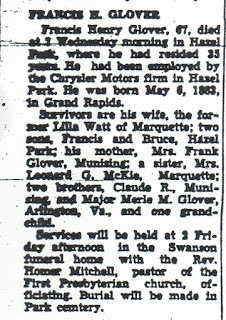 Francis H. Glover
Francis Henry Glover, 67, died at 7 Wednesday morning in Hazel Park, where he had resided 35 years.  He had been employed by the Chrysler Motors firm in Hazel Park.  He was born May 6, 1883 in Grand Rapids.

Services will be held at 2 Friday afternoon in the Swanson funeral home with the Rev. Homer Mitchell, pastor of the First Prebysterian church, officiating.  Burial will be made in Park Cemetery. 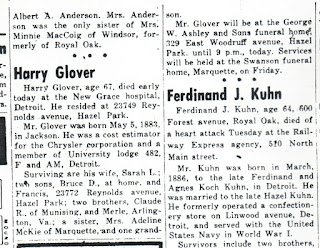 Mr. Glover was born May 5(sic), 1883 in Jackson.  He was a cost estimator for the Chrysler corporation and a member of the University lodge 482, F and AM, Detroit.

Mr. Glover will be at the George W. Ashley and Sons funeral home, 329 East Woodruff avenue, Hazel Park until 9 p.m. today.  Services will be held at the Swanson funeral home, Marquette, on Friday.