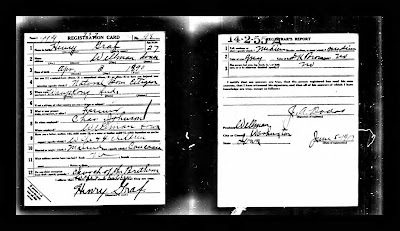 Henry Graf, is the son of my great grandparents, Valentine Graf and Nancy Mast Graf.  He registered for the WWI draft on 5 June 1917, at the age of 27.  Henry was living in Wellman, Iowa at the time and working for Chas. Johnson as a farmer. Henry's sister, Nina Graf, married a Thomas Johnson from Wellman, Iowa and even though I haven't researched the Johnson family, I am guessing there is a connection there.

Henry lists his birth place as Waupkong, Indiana, which is Waupecong or Wawpecong, Indiana, a community in Miami county, Indiana.  This is the area that the Graf family lived for many years.

Other information I found interesting on this card is the fact where Henry claims an exemption because he is a member of the Church of the Brethren and has a wife and children.  Henry, at the time of this record, was the father of four children, Charles, Gerald, Raymond, and Francis, who was three months old at the time.

WWI draft registration are one of the records I go to when I need more information about an ancestor. The cards provides a lot of information that genealogists like to find.
Posted by Brenda Leyndyke at 7:35 AM