I hit the jackpot when I married Kirk. I got a loving, mother-in-law too. I am not just saying that because this is a memorial to her, I truly did get a wonderful one. 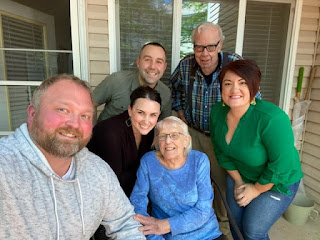 Elizabeth "Betty" Lorraine Corcoran Leyndyke died at the age of 93. She lived every one of those days with strength and grace. Betty's death will be felt by the family for a very long time.

This part is hard to write, but I feel it is important to understand why her death certificate's cause of death was accidental. Betty had a number of ailments which any one of them could have been the cause of death. She suffered from crohn's disease, heart disease, severe arthritis, and more.

Betty had been suffering with a sore toe for a few months when she went to see a podiatrist. She had a follow up appointment with the podiatrist and an infection was discovered. She went to the hospital on September 2nd, and ended up needing a toe amputation, the infection had spread. The family had hoped that she would go home upon healing. She went into the hospital feeling pretty good except for the toe. The toe next to the big toe was amputated and for some reason she never rebounded. She had the surgery under local anesthesia.

Kirk and I went to see her the next week. We were told she was delirious, uncommunicative, and not eating. We walked in the room and were greated with a huge smile. Betty wasn't 100% but she knew who we were. She was having trouble swallowing and was on some type of a liquid diet. She did get a few things mixed up, but so do I. We visited for a couple of hours. We left and Kirk talked to her aide. We were told she would be ready to go to a rehab facility once a bed could be found for her. Sometime between Wednesday when we visited and Sunday when she was moved, something happened because she was moved to an inpatient hospice care facility.

Unfortunately, Kirk wasn't notified of this until he called the hospital and they told him where she was placed. Family communication is not their strong suit. I'm not going into any more of the family dynamics but it was a stressful week to say the least.

Betty was placed in Faith Hospice in Byron Center, MI on a Sunday night. Wednesday during the day she fell. No x-rays were taken until Friday. She had broken her hip and shoulder. It is from this point on, in my opinion, that Betty was kept so sedated she couldn't wake up. My daughter, Kirsten, Kirk, and I visited Betty on a Sunday and she never woke up, and we tried talking to her. It was so sad to see her like this.

The family had had a care meeting on a Friday, which Kirk attended, imminent death was not mentioned. The doctor felt she had months to live. She died four days later.

The day she died, September 28th, we got a call from Joanne, Kirk's sister, that Betty's breathing had changed. We decided to go and be there with Betty. We missed saying good bye to her by minutes.

I know that people don't live forever, but to think that a loved one is placed in the care of hospice, she falls, and dies from complications of that fall. I have so many questions for Faith Hospice, but I am sure we will never get any anwsers.

Betty was born 20 July 1928 to Bertrand and Leona (Dollaway) Corcoran. She married James Marvin Leyndyke on 24 June 1950. They were married for 71 years. She died 28 September 2021 in Byron Township, Kent, Michigan.

Betty you will always be remembered by me and my family. This was a hard loss to accept. Betty's obituary can be found here: