Faith and Life of Mennonites and Amish in Indiana 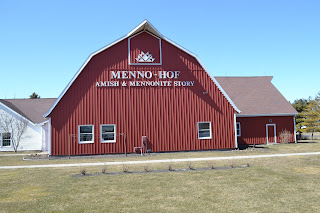 Have you ever wondered how your Mennonite and/or Amish ancestors lived and worshiped? I was in a Mennonite family history phase when I decided I wanted to take a long weekend in Shipshewana, an Amish area about an hour from my home.

One of the attractions in Shipshewana is Menno-Hof. The word "Menno" is in tribute to Menno Simons, an early anabaptist leader. "Hof "is the German word for homestead.

The Menno-Hof site seeks to portray accurate information about the Mennonites and Amish. Menno-Hof tells the historical story by using movies, displays, stories, quizzes, charts, audiotapes, and tours. It is an interactive, interesting, living history site.

The first stop, "Good Fences Make Good Community", introduces visitors to the Anabaptists. Menno-Hof uses the anabaptist term to describe the Mennonites, Amish, and Hutterites whose movement began during the Reformation in the 1500's, in Europe. It is a good introduction to the anabaptists.

Menno-Hof is laid out so that you follow the building through twenty-four areas, each area with its own story to tell. I will highlight a few of these areas, but if you go don't skip any, they all are interesting. 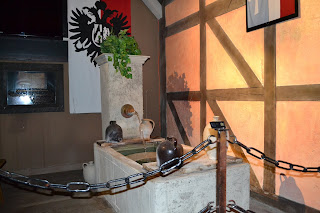 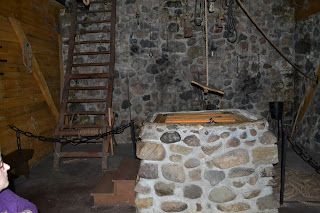 A dungeon, like the one where Anabaptists were imprisoned, tortured, and executed, is replicated. Anabaptists were persecuted for wanting to have a church free from state control. Anabaptists was the first church in over one hundred years to call for and practice the separation of church and state.

The Harbor tells the story of emigration from Switzerland. Anabaptists travelled to places throughout Europe. Also, during this stop on the self-guided tour visitors are told why the Anabaptists divided into Mennonites, Hutterites, and Amish. 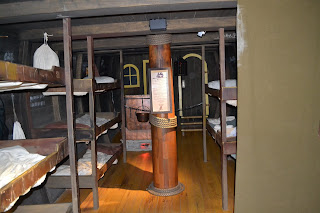 The Harbormaster’s Shack, Sailing Ship, and Coming to America explores the migration to America by the Anabaptists. William Penn invited them to Pennsylvania, around 1683. It wasn't until 1841 that the anabaptists settled in Indiana. Other migrations included Russian Mennonites to America and Canada West.

Are you confused about what is Mennonite, Amish, and Hutterite? A separate display at Menno-Hof charts the similarities and differences. Anabaptists refers to all three at Menno-Hof. Mennonites is the name that first became attached to anabaptists. The Amish, under Jacob Amman, left the Mennonite group around 1693 because they felt the Mennonites were becoming too much like the world around them. The Hutterites are named after Jacob Hutter. They organized in Moravia (the Czech Republic).

Other displays include a print shop, story corner, song samples, children's play area meetinghouse, and residence set-up. Time is spent learning about the community and its people and their beliefs.

Toward the end of the tour is the "Tornado Theater" where one can experience the wind power of a tornado and learn about how Mennonite and Amish crews helped with the cleanup of natural disasters.

All and all I found Menno-Hof to be a very, educational experience. Here are a few things I learned at Menno-Hof.

My maternal side of the family has quite a few surnames that are of Mennonite or Amish heritage: Mast/Maust, Livengood, Seese, Beiler, Berkey, Hershberger, Schrock, Forney, Nafzinger, and Schrag/Schrock.

Posted by Brenda Leyndyke at 7:59 AM