My new found 'Glover' cousin shared Alexander Glover's will with me.  Alexander Glover is my paternal 4x great grandfather (Alexander, Samuel S., Samuel S., Jr, Frank, Harry, Bruce, Me)  First of all I would like to thank Jared Willson, Esquire, for his superb handwriting.  This is one of the easiest to read wills I have seen. 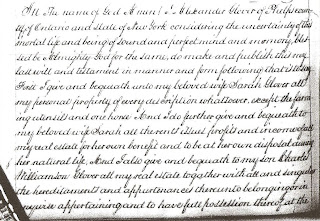 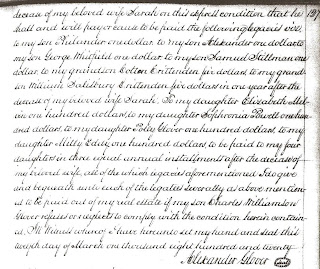 Alexander's Will:
In the name of God Amen!  I Alexander Glover of Phelps county of Ontario and state of New York considering the uncertainty of this mortal life and being of sound and perfect mind and memory, blessed be Almighty God for the same, do make and publish this my last will and testament in manner and form following that is to say.  First I give and bequeath unto my beloved wife Sarah Glover all my personal property of every description whatsoever, except the farming utensil and one home  And I do further give and bequeath to my beloved wife Sarah all the rents issues profits and income of all my real estate for her own benefit and to be at her own disposal during her natural life.  And I also give and bequeath to my son Charles Williamson Glover all my real estate together with all and singular the hereditaments and appurtenances there unto belonging or in anywise appertaining and to have full possession there of at the decease of my beloved wife Sarah on this express condition that he shall and will pay or cause to be paid the following legacies vis.  to my son Philander one dollar. to my son Alexander one dollar, to my son George Whitfield one dollar. to my son Samuel Stillman one dollar.  to my grandson Cotton Crittenden five dollars. to my grandson William Salisbury Crittenden five dollars in one year after the decease of my beloved wife Sarah.  To my daughter Elizabeth Melvin one hundred dollars. to my daughter Sophronia Powell one hundred dollars. to my daughter Polly Glover one hundred dollars. to my daughter Milly Eddy one hundred dollars to be paid to my four daughters in three equal annual installments after the decease of my beloved wife all of which legacies aforementioned  I do give and bequeath unto each of the legatees severally as above mentioned to be paid out of my real estate if my son Charles Williamson Glover refuses or neglects to comply with the condition herein contained.  In Witness whereof I have hereunto set my hand and seal this twelfth day of March one thousand eight hundred and twenty  Alexander Glover Seal

Alexander's belief in God and love of his wife, Sarah was evident in his will.  I have found 12 children born to Alexander and Sarah (Salisbury) Glover:  Philander, Sarah, Elizabeth, Alexander, Sophronia, Rachel, George Whitfield, Charles Williamson, Samuel Stillman, Polly, Amelia, and William Salisbury.  Alexander's will lists nine children.  The three not mentioned are Sarah, Rachel, and William Salisbury.  I know that William Salisbury Glover died at the age of 1.   I have often wondered about the middle names of the children in my Glover family.  A few times I have found surnames as middle names, I wonder how many of Alexander's children's middle names have clues in them.
Posted by Brenda Leyndyke at 7:00 AM