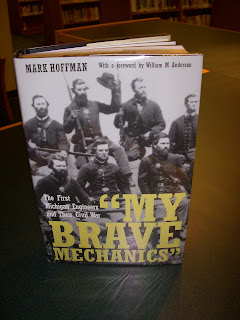 Do you have one ancestor that intrigues you more than another?  I seem to be intrigued with my great great grandfather, Samuel Stillman Glover, Jr, lately.  Samuel is the civil war veteran who's pension file I ordered.  Once I found out about Samuel's civil war service I wanted to find out more.  I knew that he served in Company H, 1st Regiment of Engineers and Mechanics for Michigan.  So, when I discovered a book on the Michigan volunteers I headed to the library.

There is a book by Mark Hoffman, "My Brave Mechanics" that I should probably buy as every time I go to the library I read a little more of it. (It is part of the local history section and unavailable for checkout)  The book is a well written, sourced account of the brave men and their service in the Civil War.

The Engineers and Mechanics were a volunteer group organized to support the Corps of Engineers for the Union.  These volunteers gathered for training in Marshall, Michigan at the county fairgrounds.  This military camp became known as Camp Owen, named after the Michigan state treasurer, John Owen.  In Chapter 3, Hoffman describes the camp conditions.

The part of the book I was most interested in was on page 90, Hoffman describes General Buell's supply line.  He talks of the confederates attacking all along the supply line with the Michigan Engineers being in harms way.  He continues, "Samuel S. Glover was sent on July 13 as a mounted courier from Shelbyville south along the pike to Buell's headquarters at Huntsville.  While crossing over Elk Ridge near Fayetteville, Glover was shot in the right knee by bushwhackers.  In great pain he clung to his horse and barely escaped capture by outdistancing his attackers.  His wound never healed properly and was still troubling him thirty five years later"  Hoffman cited sources for this entry.  The sources included the Compiled Military Service Records, William H. Kimball Diary, Ezra Stearns Diary, Regimental Order Books, Special Orders and Regimental Descriptive Rolls.

The information on Samuel Glover supported the information found in his obituary and civil war pension file.  Each time I read about Samuel's civil war service I am in awe of his bravery and how close he came to being captured or even worse, killed.
Posted by Brenda Leyndyke at 7:00 AM