Week 2: Winter. What was winter like where and when you grew up? Describe not only the climate, but how the season influenced your activities, food choices, etc. 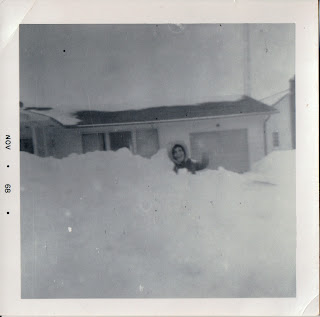 ﻿Me in my front yard on Parrott Street in Deckerville, Michigan.  11 years old
One of the great things about living in Michigan is the ability to enjoy the four seasons.  Winter in Michigan can be an adventure.  The weather will dictate how much of an adventure you will have.  Winter weather in Michigan can go from temperatures in the 50's to Teens in a day.  Throw in the wind chill and you can have some bitter, cold days.  Lake effect snow storms (cold winds move across warmer expanses of water, like any one of the Great Lakes, and creates lots of snow) is another joy of living in Michigan.  I remember two significant blizzards in my younger days.  One was from the picture above, woke up Thanksgiving morning to snow.  I don't remember how much snow we got during this storm, but I remember seeing snow drifts as high as some people's roofs.  Another one was when I was attending Western Michigan University in Kalamazoo, Michigan.  It was January of 1978, the area got 24 inches of snow in about a days time.  The biggest advantage to getting 'dumped on' was snow days!

As a child I loved snow days.  A snow day usually was spent with friends.  We would gather at each other's houses and play games.  I liked Monopoly, Careers and Life.  Another activity we enjoyed on snow days, or any day it snowed, was sledding.  We would bundle up in our winter gear and head to the local golf course to go down the hills there.  Winter gear comprised of layers and layers of clothes.  Mittens over gloves, long underwear, scarves, 2 pairs of socks, stocking hats that reached to your waist, winter coats and snow pants were a necessity.  It also included bread bags over your shoes, so you could get your boots on!  I remember having a sled, some of my friends had toboggans.  We had a great time.

Another winter activity was ice skating.  The local tennis courts would be frozen over to allow for skating and hockey playing.  One half was for skaters and the other half for hockey.  I never played hockey, but I remember spending lots of time skating.  Everyone I knew had their own skates.  I spent my youth in two towns in Michigan, Deckerville and Harbor Beach.  Harbor Beach was situated on Lake Huron.  The lake would freeze over and sometimes we would skate there.  It wasn't as nice as it had bumps and dead fish in it!  My mother would never approve of us skating on the lake.  I remember a farmer, who lived on a creek, set up a skating place where you could go and skate on the creek.  It had a warming house, and hot drinks.  A step up from the local tennis courts.

Other times were spent making a snowman and snow forts. Snow forts were essential if you were going to have a snowball fight.  Have you ever made a snow angel or caught snowflakes on your tongue?  I still feel the urge to do this when it snows!

The best part of playing in the snow was coming inside and making hot chocolate.  Nothing warms you up after playing outside than a nice cup of cocoa, with marshmallows, of course.  Other great winter dishes, that I remember, were chili, beef stew, beef noodle soup, and chicken a la king.  My mother was an excellent cook and made everything from scratch.

We are experiencing lake effect snow today as I write this.  What have I planned for dinner?  Why, chili, of course.

52 Weeks of Personal Genealogy & History by Amy Coffin, of the We Tree blog, is a series of weekly blogging prompts (one for each week of 2011) that invite genealogists and others to record memories and insights about their own lives for future descendants. You do not have to be a blogger to participate. If you do not have a genealogy blog, write down your memories on your computer, or simply record them on paper and keep them with your files.
Posted by Brenda Leyndyke at 8:00 AM