Museum of History at Brethren, Michigan 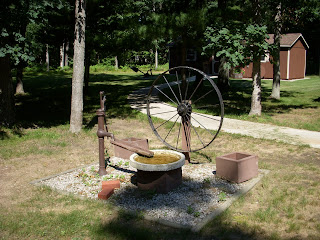 Brethren Michigan is the hometown of my mother and her parents, Otto August and Daisy Ellen (Graf) Fredricks.  It is a very small village located in the northwest area of lower Michigan.  Our family visited this area at least once a year for as long as I can remember, usually going in the summer for the Fredricks Family Reunion.

The Brethren Heritage Association is responsible for a delightful museum at the corner of Cart Avenue and Park Service Road, near Lake Eleanor.  The museum is a restored log cabin once owned by Christy Brown,who owned a general store.  Local artifacts, historical items, newspaper clippings and more can be found at the museum.  A second building, Ostrander's Cabin, in being restored, too.

The museum is open by appointment only.  One year it was open during the family reunion and I was able to walk through it.  Some of the items in the museum include a bed, pioneer kitchen area, old tools and dishes, and news clippings of area residents.

Bricks are laid in front of the museum as memorials to loved ones.  Family members can purchase bricks and the proceeds go toward supporting the museum.  The Fredricks family has purchased numerous bricks.  Every year at the reunion a white elephant auction is held.  The money raised from this goes towards purchasing supplies for the reunion.  In addition, memorial bricks were purchased. 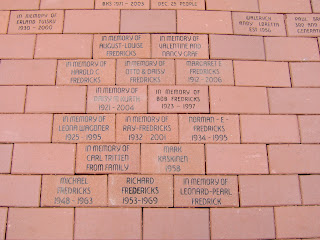