Travis' Birthday: My Thoughts on His Birth 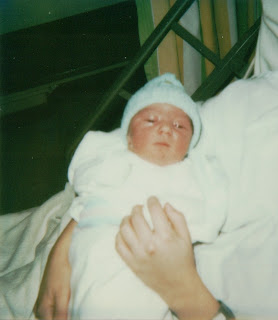 Happy Birthday, Travis Kirk
Just hours new
"It's a boy" my husband exclaimed the morning Travis was born.  We had pretty much decided that two children were all we were going to have, so having a girl and then a boy was perfect.
Travis Kirk's due date was December 25th, and being 12 days overdue the doctor decided it was best to induce my labor on January 6th.  The doctor said the baby was just getting fat in there!  Travis, being the independent person he is, decided to make his appearance into the world on his own.
My in-laws had arrived Monday afternoon to stay with my daughter.  I was preparing dinner and getting ready to go to the hospital in the morning.  I didn't give any thought to the back ache I was experiencing most of the evening.  A little before 10 pm I decided to take a shower and as I was getting my pajama's on my labor came on fast and hard!  ﻿My husband and I hurried into the car and travelled the 12 miles to the hospital.  I wasn't sure we were going to make it in time, especially when he took the railroad tracks a little fast.
I arrived at the hospital at 10:20pm, Monday night.  I had a 19 hour labor for Kirsten, so I figured I had a few hours to go yet.  Travis thought otherwise.  He was born at 12:02am Tuesday, January 6th.  It looks like his birthday was going to be January 6th one way or another.
We had moved to Northwest Michigan during my pregnancy.  The hospital was a bit more progressive than the one Kirsten was born in.  I labored and delivered in a birthing room.  Kirk was present the whole time and even was allowed to cut the umbilical cord.  I immediately held Travis as the nurse cleaned him up.  They even let me nurse him within minutes.  Kirk went with the nurse to the nursery and was able to bathe, weigh and measure him.  Travis weighed 9 pounds 2 ounces and was 20 1/2 inches long.
I remember the excitement in my husband's voice as he told me we had a boy.  I remember thinking how big Travis looked.  I thought his hands looked big.  I also thought of how blessed I was to have given birth to a healthy baby boy.  When he opened his blue eyes (later turned brown) I knew I was in love.  Travis was the perfect second baby.  He was calm and content and slept through the night starting with his second night home from the hospital.
When Kirsten woke up on January 6th, her grandmother told her she had a baby brother.  The first words out of her mouth were "I didn't want one with a penis".  My poor mother-in-law!  I had taught sex education previously and taught my children the proper body part names early.  Kirsten, who was 3, came to the hospital with her grandparents to visit and see Travis for the first time.  She was very excited.  She thought he had wrinkly feet.
Travis has brought a lot of joy and laughter into my life the past 24 years.  I am very proud of the young man he has become.  Happy Birthday, Travis!  I love you.
Posted by Brenda Leyndyke at 6:00 AM