Week 6:  Radio and Television:  What was your favorite radio or television show from your childhood?  What was the program about and who was in it?﻿ 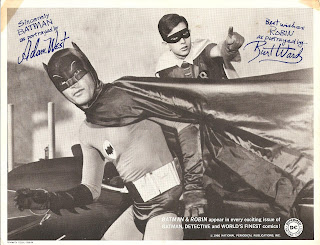 Promotional 8 x 10 Picture I could hardly wait for it to arrive!

Oh, how I loved hearing this theme song when it started my favorite television show, Batman,  in 1966.  I was obsessed with everything Batman.  I use to run around the house at the beginning of the show.  I was a big fan of Batman, but liked Robin even more.

Who could forget the various characters: Commissioner Gordon, Chief O'Hara, Alfred and Aunt Harriet?  They were my weekly friends.  Add the villains: Joker, Penguin, Riddler, Catwoman, Mad Hatter, King Tut and Bookworm and my week was complete.

I loved every "POW", "BAM", and "ZONK"!  Remember " Tune in tomorrow, same Bat-time, same Bat-channel"?  I do, and that is why I was so upset when we moved to Harbor Beach, Michigan and could not get the ABC channel.  We moved in January 1968 and I think Batman was cancelled in March of that year, so I didn't miss all that much.  But, I was disappointed, nevertheless.

In addition to watching Batman, every week, I would devour everything in print form.  Once I ordered an 8 x 10 promotional picture, and couldn't wait for it to arrive in the mail.  I saved the article from The Detroit News TV magazine, and other teen magazines.  Here is a sample of the things I saved in a scrapbook. 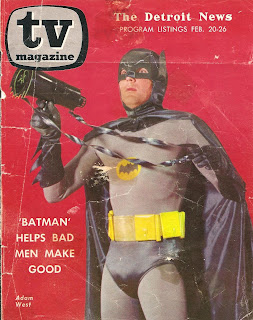 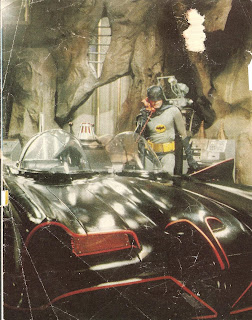 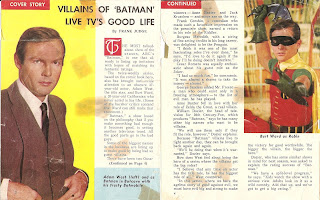 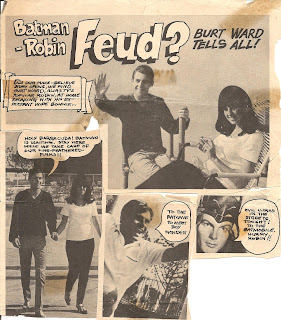 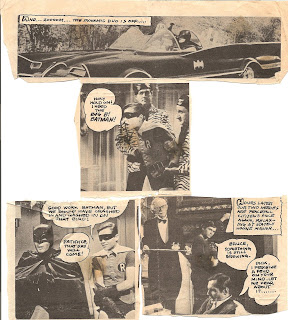 52 Weeks of Personal Genealogy & History by Amy Coffin, of the We Tree blog, is a series of weekly blogging prompts (one for each week of 2011) that invite genealogists and others to record memories and insights about their own lives for future descendants. You do not have to be a blogger to participate. If you do not have a genealogy blog, write down your memories on your computer, or simply record them on paper and keep them with your files.

Thank you, Amy for the great ideas.  Thank you, Tom, at Geneabloggers for hosting this series of blogging prompts.
Posted by Brenda Leyndyke at 9:00 AM