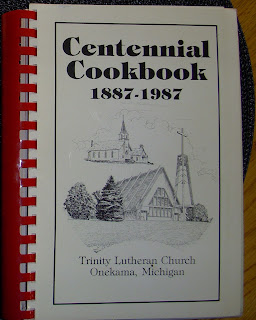 One of the cookbooks I have in my collection is a Centennial Cookbook from Trinity Lutheran Church in Onekema, Michigan.  This was the home church of my mother and her family.  I was baptised in this church.  This 187 page cookbook contains 38 recipes from family members.

The following relatives have recipes in this cookbook:

Kathryn Puryear (my mother's oldest sister)-Aunt Kate was on the cookbook committee and has 17 recipes in the cookbook.  Kathryn's maiden name is Fredricks, daughter of Otto and Daisy Fredricks.

Kathryn Welch (my cousin-daughter of Kathryn Puryear above)-Kathryn has 5 recipes.  Kathryn's maiden name is Tritten.  She is the daughter of Carl Tritten and Kathryn Fredricks.

John Tritten (my cousin-son of Kathryn Puryear above)-John added 1 recipe to the book.  John is the son of Carl Tritten and Kathryn Fredricks.

Heather Tritten (the daughter of John and Susie Tritten, above)  She contributed 2 recipes.

Audrey Glover (my mother)-Mom has 2 recipes included.  Audrey is the daughter of Otto and Daisy Fredricks.

Lola Brown (my mother's sister)-Aunt Lola contributed 3 recipes.  Lola's maiden name is Fredricks, she married Walter Brown.  She is the daughter of Otto and Daisy Fredricks.