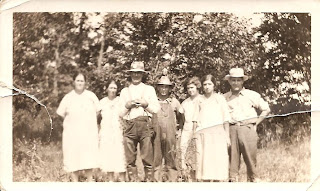 The Valentine Graf Family
L-R:  Daisy, Mary, Valentine, Henry, Nina, Margaret, Frank
A baby boy, Valentine, was born to ﻿Casper Graf and Mary Wrightweasner Graf on 14 December 1865 in Amboy, Miami, Indiana.  He was the seventh of eight children born to them.  Valentine was three and a half years old when his father died.  Valentine grew up with his mother and siblings.  The 1870 census shows Mary Graf as head of household and eight children, ages 2 through 17.  I wonder what impact his father's death had on his life.  He mother never remarried.
Valentine Graf can be found in the 1880 Census in North Grove, Miami, Indiana which is about 3 miles from Amboy.  He is 14 at the time and listed as a farm labourer.  He lived as a farmer throughout his life.
According to the Indiana Marriage Collection, 1800-1941, Valentine Graf married Nancy Mast, daughter of David S. Mast and Anna 'Nancy' Livengood on 24 November 1888, in Miami County, Indiana.  They had ten children, seven who survived to adulthood:
Sometime between 1900 and 1905, Valentine and his family moved from Miami County, Indiana to Brethren, Michigan in Manistee county.  My grandmother, Valentine's daughter-Daisy, told a story that the family moved by wagon train with other settlers to Brethren, Michigan to start Church of Brethren and that is how the town got its' name.  Further research finds that Brethren, Michigan was established in 1900 by Samuel S. Thorpe as a colony of the German Baptist Brethren Church.
I believe religion was an important part of his life.  Hopefully, it brought him comfort in a twelve year period, 1896-1908, when he lost three children and his wife, Nancy.  Valentine never remarried and raised his children after her death. 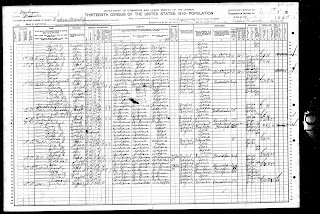 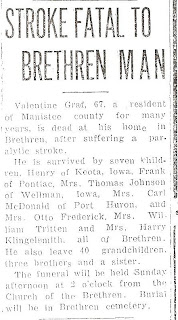 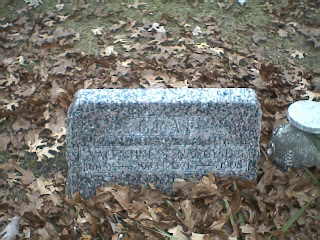