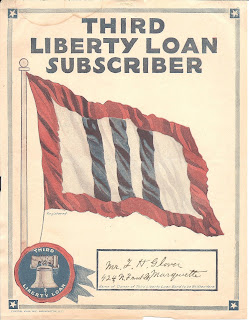 Third Liberty Loan Subscriber Poster
found in Hattie Fenn Glover's Bible
Issued Circa 1918
Name of Owner:  Mr. F.H. Glover (Hattie's husband)
The Third Liberty Loan was a war bond sold by the United States to raise money for the World War I war effort.  Americans were asked to donate $170,500,000 in support of the allied troops.  An aggressive campaign was held.  Posters, broadsides and movie stars were used for advertising the bonds.  It was a way for Americans to demonstrate their patriotism.  Various organizations sold the bonds.  The YMCA, YWCA, National Catholic War Council, Jewish Welfare Board, War Camp Community Service, American Library Association and the Salvation Army all came together for the Third Liberty Loan bonds, in an effort to raise funds.
Posted by Brenda Leyndyke at 6:00 AM