Week 11-Illness and Injury.  Describe your childhood illnesses or injuries.  Who took care of you?  Did you recuperate in your own bed, on the couch in front of the television, or somewhere else? 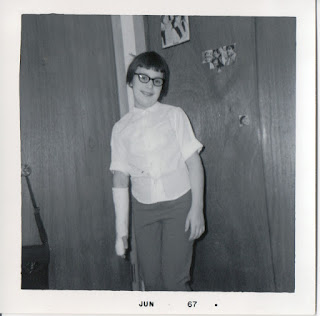 Moi! February 1967﻿
9 Years Old
One cold, February day I was out for afternoon recess.  My friends and I were chasing boys.  I'm not sure if we were playing tag or what.  The recess bell rang and I was sure I could catch up to one boy, I don't remember who I was chasing.  I ran up this small snow mound and fell coming down it.  I fell backward on the slippery slope on my right arm.  Man, did that hurt.
I was taken to the Principal's office, where I remember sitting while they went to get my dad.  He was a teacher in the high school, which was in the same building as the elementary school.  They sent the high school guidance counselor instead.  My dad was in class.  Really!?  He sat with me for a few minutes.  Next thing I know, the secretary takes me to the emergency room.  An x-ray was taken and I was then taken to my family doctor.  This was a small town so everything was in close proximity to each other.  The school was maybe four blocks from the hospital.  The doctor's office was just around the corner from the hospital.﻿
I never gave it a lot of thought at the time, but my mom didn't show up until they were putting my arm in a cast.  No one called her.  Can you imagine what would happen if a school did that today?  I didn't get a choice of fancy cast colors like they have today, it was white or white!
I was sent home, got out of school early for this!  I remember it was just before Valentine's Day and I was concerned about not being able to decorate my box for my Valentine's.  I don't remember how many days I got to stay home for, but I remember my teacher, Mrs. Groat, coming to the house.  She brought art supplies so I could complete my Valentine box at home.  I am pretty sure I went to school for Valentine's Day.

While at home and in the cast, I got out of doing the dishes.  I thought that was pretty cool.  I remember lying on the couch and watching television.  My mom took pretty good care of me.  Unfortunately, I didn't get out of much school work.  I broke my right arm and I am left handed!  And did I stop chasing boys?  Not really!
Posted by Brenda Leyndyke at 9:00 AM