The following is the officer's certificate that Captain Marcus Grant, of Company H of the First Regiment of Michigan Engineers and Mechanics, filed for Samuel S. Glover, Jr's pension.  Captain Grant describes the time, place, and manner in which Samuel became disabled.  It amazes me that my great great grandfather wasn't captured.  He was shot upon about midnight, but didn't arrive at the 35 Indiana camp until daylight.  His obituary stated he clung to his horse and the last thing he remembers is telling someone the dispatches were in his shoes.  I don't know where the 35 Indiana camp was at the time, but he travelled for 4-5 injured.  I am continuely amazed at the bravery Samuel showed.  First, he volunteered to carry dispatches.  Second, he had the forethought to get himself to safety while injured. 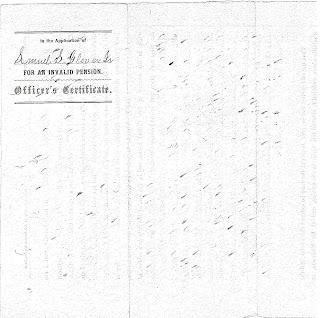 In the Application of
Samuel S. Glover Jr
FOR AN INVALID PENSION
Officer's Certificate﻿
﻿ 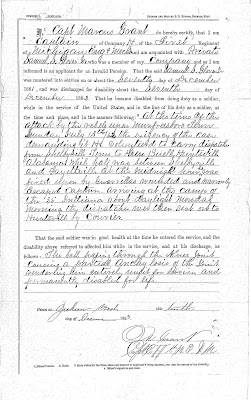 I, Capt Marcus Grant do hereby certify, that I am

Captain of Company H of the First Regiment

of Michigan Eng & Mech and am acquainted with Private

Samuel S. Glover Jr who was a member of my company and as I am

informed is an applicant for an Invalid Pension. That the said Samuel S. Glover Jr

1861, and was discharged for disability about the Seventh day of

December 1862. That he became disabled from doing duty as a soldier,

while in the service of the United States, and in the line of his duty as a soldier, at

the time and place, and in the manner following: at the time of the

attack by the rebels upon Murfreesboro Tenn

Sunday July 13th 62 the exigency of the case

demanding it He volunteerd to carry dispatches

Alabama. While half way between Shelbyville

and Fayettville at the midnight hour he was

fired upon by Guerrillas wounded and narrowly

Escaped capture. Arriving at the camp of

the 35 Indiana about daylight Monday

morning the dispatches wer then sent on to

That the said soldier was in good health at the time he entered the service, and the

disability above referred to affected him while in the service, and at his discharge, as

follows: The ball passing through the knee joint

causing a partial anchylosis of the joint

rendering him entirely unfit for service, and

Given at Jackson Mich this tenth