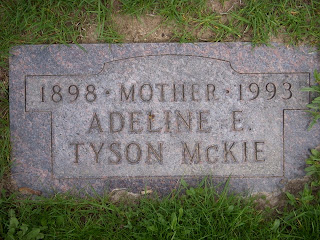 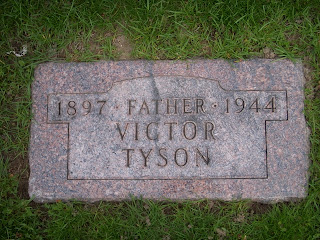 ﻿Victor Tyson
(Son of Edward Tyson and Matilda Steele)
Birth:  21 January 1897, Gosforth, Cumberland, England
Marriage (Adeline E. Glover):  25 February 1922, Marquette, Marquette, Michigan, United States
Death:  16 August 1944, Battle Creek, Calhoun, Michigan, United States
Burial:  Memorial Park Cemetery, Battle Creek, Calhoun, Michigan.
Adeline E. Glover Tyson McKie is my great aunt.  I am a little embarrassed to say it wasn't until about a month ago that I went to visit her grave, only two miles from my house.  We have lived in Battle Creek since 1988.  I never knew she lived here until a few years ago when my dad looked up his cousin who was still living here.      ﻿
Posted by Brenda Leyndyke at 6:00 AM