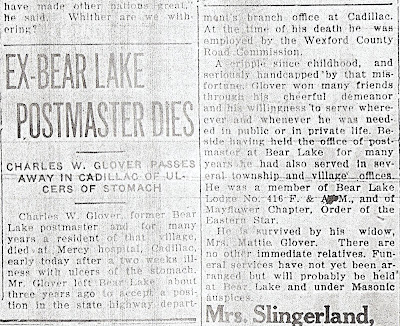 Manistee News Advocate-Manistee Daily Advocate, (Manistee, Manistee, Michigan), 13 October 1927, page 3, column 2 and 3, microfilm; Manistee Public Library, Manistee, Michigan.
EX-BEAR LAKE POSTMASTER DIES
CHARLES W. GLOVER PASSES AWAY IN CADILLAC OF ULCERS OF STOMACH
Charles W. Glover, former Bear Lake postmaster and for many years a resident of that village, died at Mercy hospital, Cadillac, early today after a two weeks illness with ulcers of the stomach.  Mr. Glover left Bear Lake about three years ago to accept a position in the state highway department's branch office at Cadillac.  At the time of his death he was employed by the Wexford County Road Commission.
A cripple since childhood, and seriously handcapped(sic) by that misfortune, Glover won many friends through his cheerful demeanor and his willingness to serve where-ever and whenever he was needed in public or in private life.  Beside having held the office of postmaster at Bear Lake for many years he had also served in several township and village offices.  He was a member of Bear Lake Lodge No. 416 F. and A. M., and of Mayflower Chapter, Order of the Eastern Star.
He is survived by his widow, Mrs. Mattie Glover.  There are no other immediate relatives.  Funeral services have not yet been arranged but will probably be held at Bear Lake and under Masonic auspices. 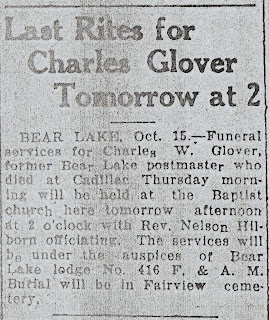