The 1st Regiment of the Engineers and Mechanics of Michigan was a civil war volunteer group of individuals that organized at Camp Owen in Marshall, Michigan, on 12 of September 1861.  Marshall, Michigan was chosen because of its' proximity to the Michigan Central Railroad.  In addition, it had a large fairgrounds where they set up camp.  Camp Owen was named after John Owen, the state treasurer at the time.   My second great grandfather, Samuel Stillman Glover, Jr. was in Company H of this regiment.

I have researched service records, pension files, and regimental papers to learn more about this regiments' service to the Union during the civil war, especially my ancestor's important dates.  The information below gives specific times and duties of the members of Company H up to the time of Samuel S. Glover Jr.'s discharge. 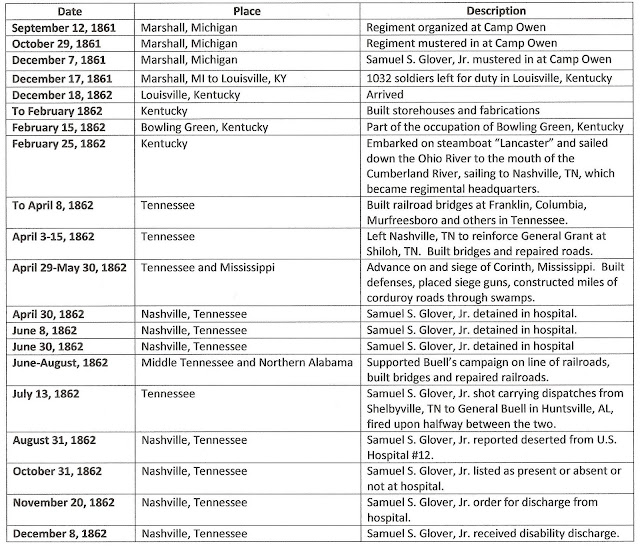 A couple of things struck me as interesting when I compiled this chart.  First, what hard workers the engineers and mechanics must have been.  Can you imagine building corduroy roads in a swamp?  Next, on August 31, 1862 he was reported as deserted from U. S. Hospital #12.  Deserted?  Does this mean what I think it does?  He received a pension, so I am guessing he returned with a suitable reason for not being there on that day.  Lastly, I enjoyed reading the October 31, 1862 entry, he was listed as present or absent or not at hospital.  I guess that is better than being listed as deceased.  I wonder which one of the three he was!

One of my sources is Mark Hoffman's book, My Brave Mechanics.  At the May Calhoun County Genealogical Society meeting, held in Marshall, Michigan, Mr. Hoffman was the presenter.  He gave a very informative talk on the role of the engineers and mechanics.  If you would like more information on this regiment, his book is a well-sourced, excellent account of their service.  I wrote about his book previously, and highly recommend it.

Sligh, Charles R., History of the Service of the First Regiment Michigan Engineers and Mechanics (Grand Rapids, Michigan: n.p., 1921).  Available through google books.
Posted by Brenda Leyndyke at 6:00 AM