Bunker Hill Day is observed on June 17th each year in parts of Massachusetts.  My fifth great grandfather, Moses Poor died at the Battle of Bunker Hill on June 17, 1775.  He served under Captain Elisha Woodbury's Company in Colonel John Stark's regiment, the 1st New Hampshire.

There is a Bunker Hill Monument that was built to commemorate the Battle of Bunker Hill.  It can be found in Charlestown, Massachusetts.  Moses Poor's name is inscribed on this monument. 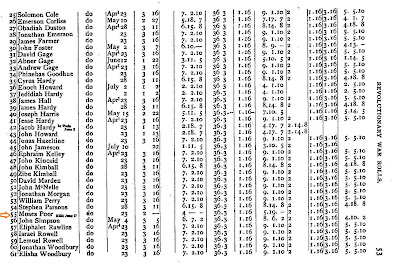 The payroll of Captain Elisha Woodbury's Company lists Moses Poor and next to his name it says, killed June 17.  Other information provided includes:
Moses Poor was born 10 March 1743 in Newbury, Essex, Massachusetts, the son of Enoch Poor and Bethiah West.  He married Hannah Sinclair (Santclare) on 31 March 1767.  He died at the age of 32.
Posted by Brenda Leyndyke at 6:00 AM