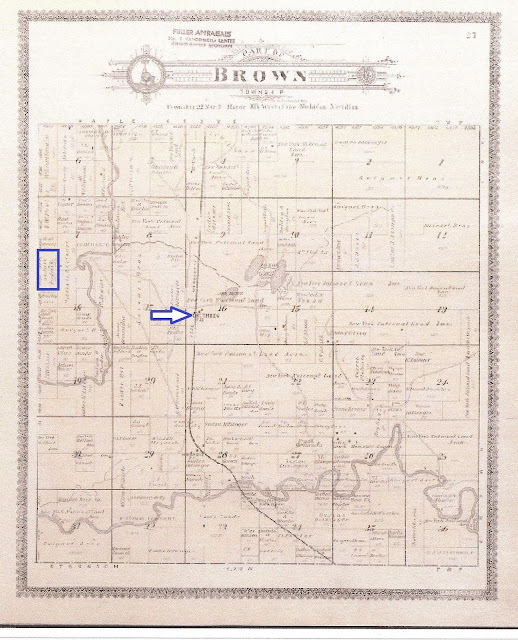 Print Source:  Geo. A. Ogle and Co., Standard Atlas of County, Michigan:  including a plat book of the villages, cities and townships of the county...patrons directory, reference business directory... (Chicago, Illinois:  Geo A. Ogle and Co., 1903). p 27.
Found online at  http://name.umdl.umich.edu/3927831.0001.001
This plat map is a little hard to see but I wanted to give the whole page in order to see the area that August Fredrick settled in on the 3rd of January 1901.  The arrow points to the village of Brethren, Michigan.  A small town in Northwestern Michigan.  The blue box outlines the land that J. August Fredrick, my great grandfather, settled on.  The farm is still in the family today.  The farm is located in Brown Township, Manistee County, Michigan.﻿ 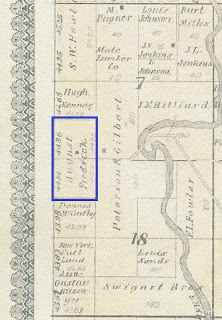 This is a cropped image of the same map above.  The boxed area is the farm of August Fredrick.  It shows who owned the land surrounding him.  None of the names are relatives as far as I know. 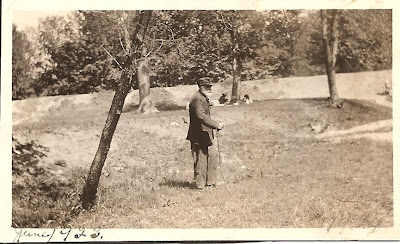 August Fredrick on his farm in June 1923, six months before his death.
﻿
My great grandparents farmed this land until they sold it to their son.  It was sold to August's son, Otto August Fredrick, who sold it to his son, Otto Robert Fredrick, who sold it to his niece and her husband.  It has been in the family for 110 years.  This past year it was given Michigan Centennial Farm distinction, meaning it has been owned by the same family for at least 100 years.
Posted by Brenda Leyndyke at 7:00 AM