Ripped From the Headlines!-Hattie's Bible 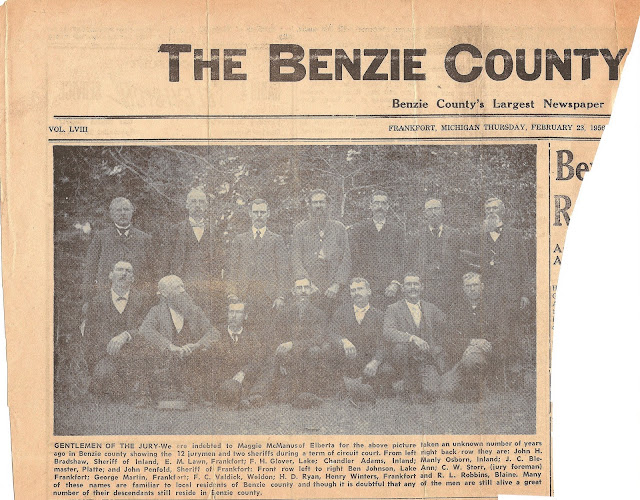 Found in Glover, Hattie L. "Fenn". In The Holy Bible: with Revised New Testament. Chicago: GW Borland & Co., 1882. Original owned in September 2011 by Brenda Leyndyke, [address for private use], Battle Creek, Michigan.
Clipping from The Benzie County Record Patriot, Frankfort, Benzie, Michigan 23 February 1956.
Caption:  GENTLEMEN OF THE JURY-We are indebted to Maggie McManus of Elberta for the above picture taken an unknown number of years ago in Benzie county showing the 12 jurymen and two sheriffs during a term of circuit court.  From left  right back row they are:  John H. Bradshaw, Sheriff of Inland; E. M. Lawn, Frankfort; F.H. Glover, Lake; Chandler Adams, Inland; Manly Osborn, Inland; J.C. Blemaster, Platte; and John Penfold, Sheriff of Frankfort.  Front row left to right Ben Johnson, Lake Ann; C.W. Storr, (jury foreman) Frankfort; George Martin, Frankfort; F.C. Valdick, Weldom; H.D. Ryan, Henry Winters, Frankfort and R. L. Robbins, Blaine.  Many of these names are familiar to local residents of Benzie county and though it is doubtful that any of the men are still alive a great number of their descendants still reside in Benzie county.
This newspaper clipping was literaly "ripped from the headlines" from the looks of it.  I found this in my great grandmother's, Hattie Fenn Glover, bible.  Hattie's husband, and my great-grandfather is the F. H. Glover, who is third from the left in the back row.
I have a couple of other pictures of Frank H. Glover:  one is when he was a young boy and the other is on his wedding day in 1882.  I enjoyed seeing what he looked like at this point in his life.  This picture must have been taken before 1910.  Frank and Hattie Glover can be found in the 1900 U.S. Census for Benzie County, Michigan.  They have moved to Marquette, Michigan in time for the 1910 U.S. Census.
I don't know any of the particulars concerning the case the jury served on.  I will have to add it to my 'to-do' list.  Do you know anyone in the photo?  Please leave a comment if you can provide more information.
﻿
Posted by Brenda Leyndyke at 7:00 AM