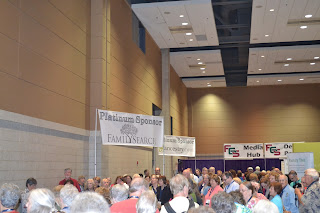 Thank you to Family Search, a Platinum Sponsor

I knew before I left home that I wouldn't feel like blogging on Friday.  Friday was my fullest day.  The day started at 8:00 a.m. with Paul Milner.  Paul Milner is a delightful way to start your day.  His session, "Effective Use of Scotlands People" made we want to jump into my Scottish ancestry.  I have heard Paul Milner speak before and he fills his sessions with humor and great research tips.

Next, I attended Loretto 'Lou' Szucs, "Finding Ethnic Origins and Naturalization's in the Midwest" session.  Lou broke the information down in easy to understand format and filled the presentation with a lot of examples.

Friday was the day I had set aside one session to visit the Exhibit Hall.  It is less busy during session times and I wanted to make sure I took advantage of all the vendors had to offer.  I visited the Media Hub first and posted a few updates to twitter.  Then, I went exploring.  I spent time looking at books. Even in the digital age, I still love books.  I had a couple I was still thinking about and the only thing I ended up buying was a baby bib "I'm the newest sprout on my family tree" for my nephew.

For the first time I decided to attend a sponsored luncheon.  I chose the Indiana Genealogical Society's (IGS) lunch with Curt Wichter, Director of Allen County Public Library speaking.  I am a member of IGS and decided to support the organization.  Curt Wichter talked about all the good things that IGS does. 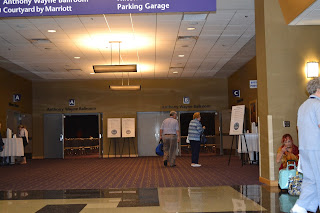 Wayne A and Wayne B Rooms
These rooms seat about 300-400 each and there were times they were packed.

The first afternoon session was by John Philip Colletta, author of They Came in Ships.  If you ever get a chance to hear Dr. Colletta speak, you have to go to it. His session, "Passenger Arrival Records, Colonial Times to Mid-20th Century" was filled with humor and great advice for finding those elusive ancestors in passenger arrival records.  I enjoyed his talk so much, that I went and purchased his book.

Ginger Frere presented the next session on "The Newberry:  Chicago's Independent Research Library" I am embarrassed to say that all the times I have been to Chicago, I have not researched at the Newberry.  I am going to change that, especially since Ms. Frere introduced me to how much The Newberry has to offer researchers.  During this session, the Wayne Convention Center had to be evacuated for a fire alarm.  This session was in Hamilton Hall, which is not part of the Convention Center, but in the Hilton Hotel, which is connected to the convention hall.  We did not have to evacuate. It was a false alarm and I don't know why the alarm was ringing.

My educational part of the day ended with Michael D. Lacopo session, "Methods For Identifying the German Origins of American Immigrants".  This was a last minute change.  (Gasp!  I know I went off my schedule!)  I had being hearing all day about what a wonderful speaker he was and decided to go see what his take was on German Immigrants.  I had heard Dr. Lacopo speak at FGS 2011, so I knew I couldn't go wrong with this session.  The last session on Friday was the one that was giving me fits, anyway.  I could have been happy going to six of the eight sessions.

One would think after a day filled like mine, I would head back to the hotel to unwind.  No, I still had one more thing to do.  After a quick stop at King Gyro's, Kirk and I headed to the Allen County Public Library's Evening at the Library.  Family Search sponsored "Journey through the Generations with Our Veterans.  Donations were accepted and the total raised for the Preserve the Pension fund was $92,000. The evening started with a presentation about the War of 1812, the awarding of an 1812 Quilt, and a dessert buffet-which they said had a limit of five desserts.  You should have seen the desserts, huge brownies and cookies, breads, muffins, and tarts. Five was very generous and I felt a little piggy taking two.  They were delicious. Other participants stayed to listen to, or dance to, music.  The library was open until midnight for researchers, but I was too tired.  I headed back to the hotel and Kirk went to a Fort Wayne Tin Caps baseball game.  The stadium is adjacent to the Marriott Courtyard hotel we were staying in.

I figured I would be asleep as soon as my head hit the pillow, but a rock band had other plans for me. The outdoor gardens to the Botanical Conservatory was hosting a concert which could be heard very clearly from my hotel room.  The band was actually very good so it wasn't a bad way to end a very long day. 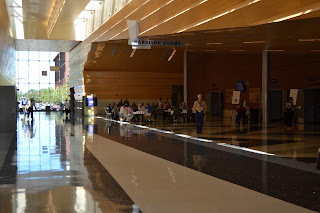 Posted by Brenda Leyndyke at 9:51 PM

Email ThisBlogThis!Share to TwitterShare to FacebookShare to Pinterest
Labels: FGS 2013