Fredricks Reunion Pie Baking Contest and the Winner Is.... 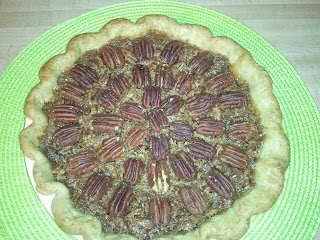 This year, for the first time, the Fredricks' Family Reunion had a Pie Baking Contest. My entry for Bourbon Pecan Pie was chosen as the winner.  It must have been the bourbon that did it.  I think there were about 10 pies that were entered.  I wish I had written them all down.  I remember the following pies: custard, lemon meringue, pecan, french apple, apple squares, cherry, Grandma Daisy's Orange?, and others. 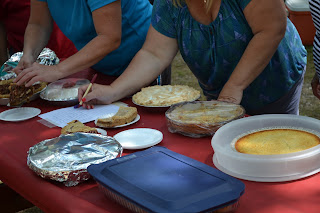 Signing in for the Pie Baking Contest 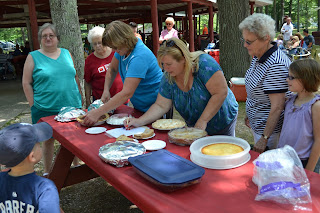 People who brought pies signed in by name and kind of pie.  Cousin Cheryl cut one piece from each pie to be judged.  Five judges tasted the pies and decided on a winner.  The rest of the pies were placed on the dessert table for others to enjoy. 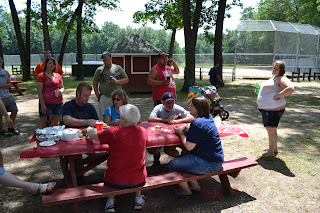 I don't think it is a surprise that I love to cook, but I was very surprised that I won. Here is my Fredricks' Family Reunion Pie Baking Contest Winning Recipe:

Toast the pecans by placing pecans on a baking sheet in a 350 degree oven for a few minutes.  Watch closely to prevent burning.  Reserve the nicest halves for the topping.

In medium saucepan, combine the butter, brown sugar, corn syrup and salt.  Bring to a boil over medium heat, and stirring constantly, continue to boil for 1 minute. Remove from the heat and stir in the nuts, bourbon, and the vanilla.  Set the mixture aside to cool slightly, about 5 minutes.  Whisk the beaten eggs into the filling until smooth.  Put the baked pie shell on a sheet pan and pour the filling into the hot crust.  Arrange pecan halves, decoratively, on the top of the pie.

Bake on the lower oven rack until the edges are set but the center is still slightly loose, about 40-45 minutes. If the edges get very dark, cover them with aluminum foil half way during baking.  Cool on a rack.

Note:  A blind baked pie crust is a single pie crust that has been baked without any filling.  I put a piece of parchment paper in the pie crust and then dried beans to hold the shape of the crust.  Pie weights or pie chains can be used in place of the beans.

Posted by Brenda Leyndyke at 7:29 AM