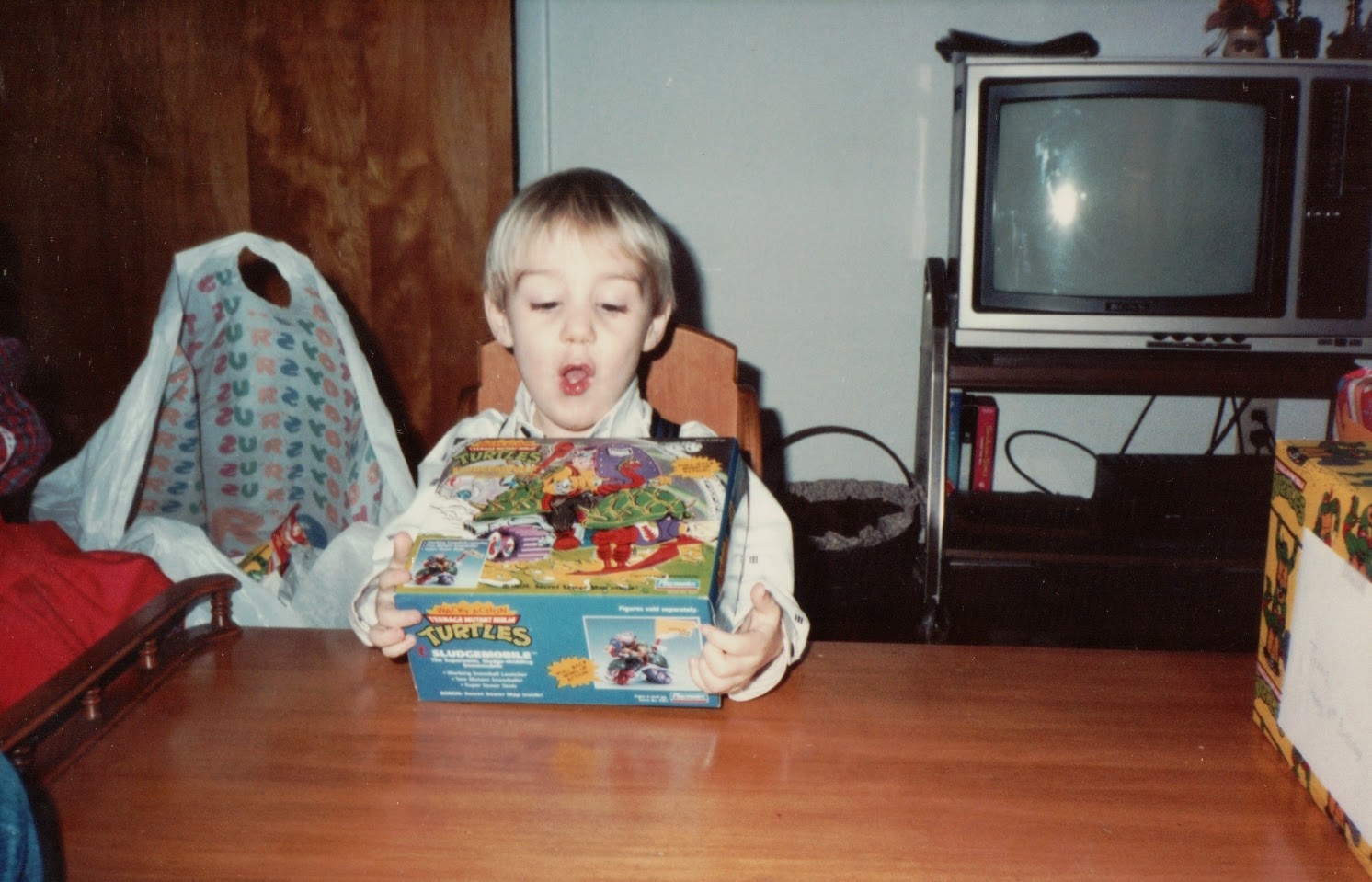 A Teenage Mutant Ninja Turtle vehicle.  It was a hit!

January birthday parties are tough to plan in Michigan because you never know what the weather will be like.  There were many 6th of January's when it snowed, making travel difficult.  There were many times when one or more sets of grandparents were planning to come and celebrate Travis' birthday and couldn't because of the weather. This year, 1991, found Travis' paternal grandparents living in Florida. 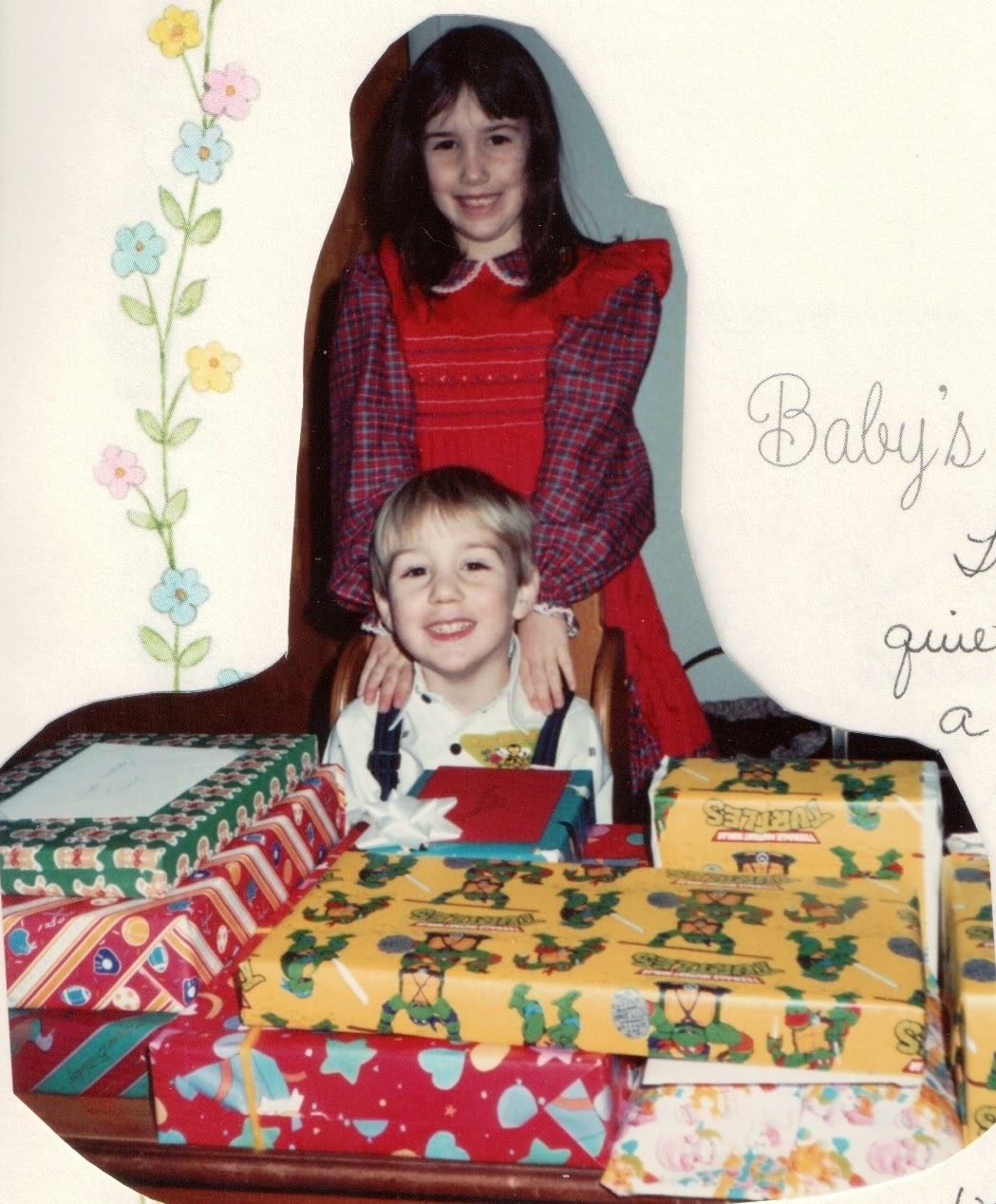 Travis and Kirsten before the gift opening
in our living room in Battle Creek, Michigan

Travis' 4th birthday was one such year.  Travis turned four with a quiet party at home with Dad, Mom, and Kirsten.  I still made sure he had a great birthday.  We celebrated in Teenage Mutant Ninja Turtle (TMNT) style.  The wrapping paper, cake, and party accessories were all TMNT.  A few of the gifts were turtle related, too. Travis loved all things turtle that year.  He would play for hours with his turtles.  I still have a big box of TMNT stuff saved for him. 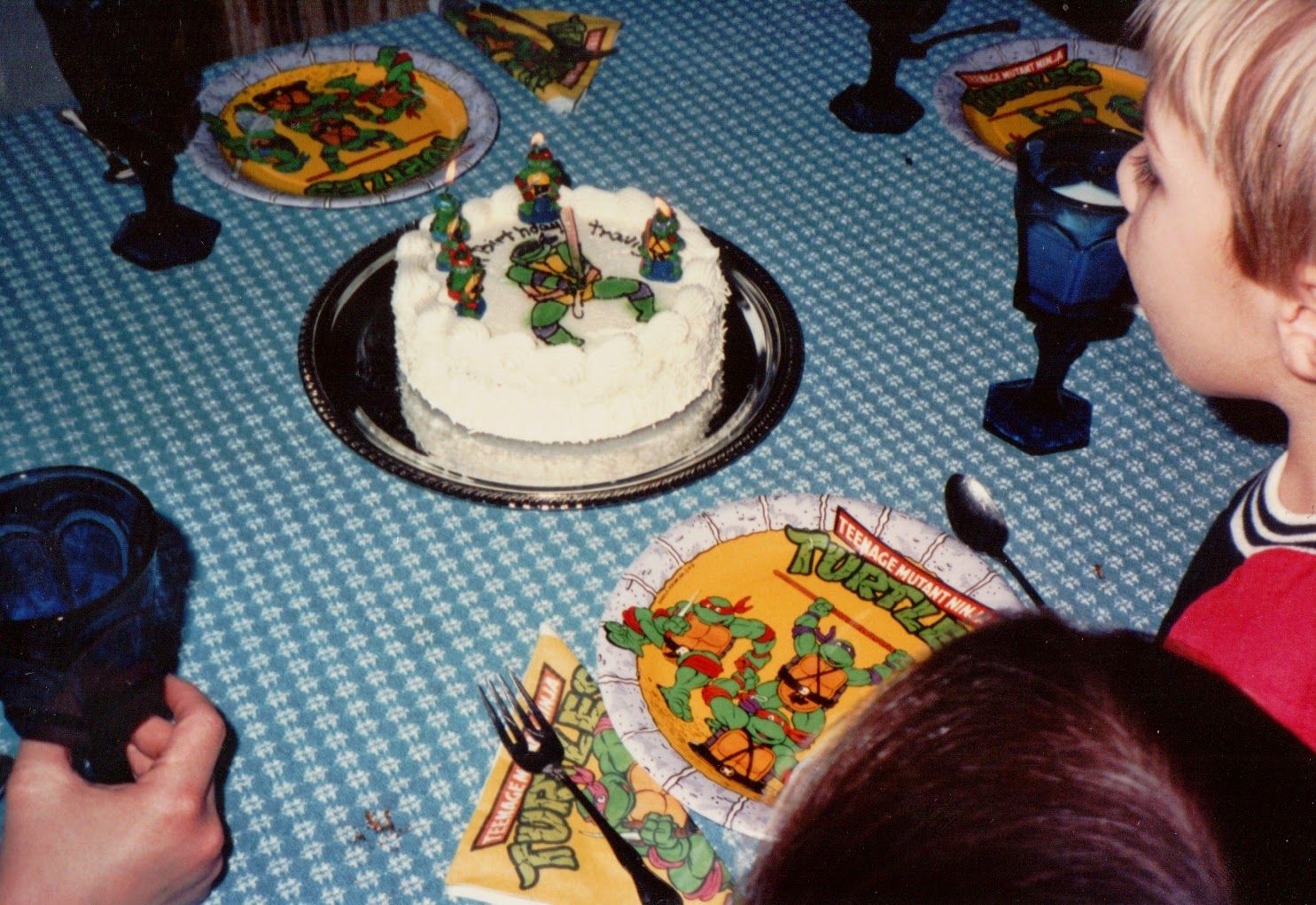 Travis blowing out his birthday candles.

I wanted all their birthdays to be special and I would set the table with a tablecloth, good stoneware and even let them use my Fostoria Virginia Blue crystal goblets, pictured above.  It was a treat for them.  I learned a long time ago that I was not a cake decorator!  Travis always liked his cake from the Felpausch grocery store, a local grocery store at the time.  This one was decorated with one of the ninja turtles and four ninja turtle candles.  One each for Michelangelo, Rafael, Donatello and Leonardo, the ninja turtle names.  Birthday cake was served on TMNT plates with matching napkins. 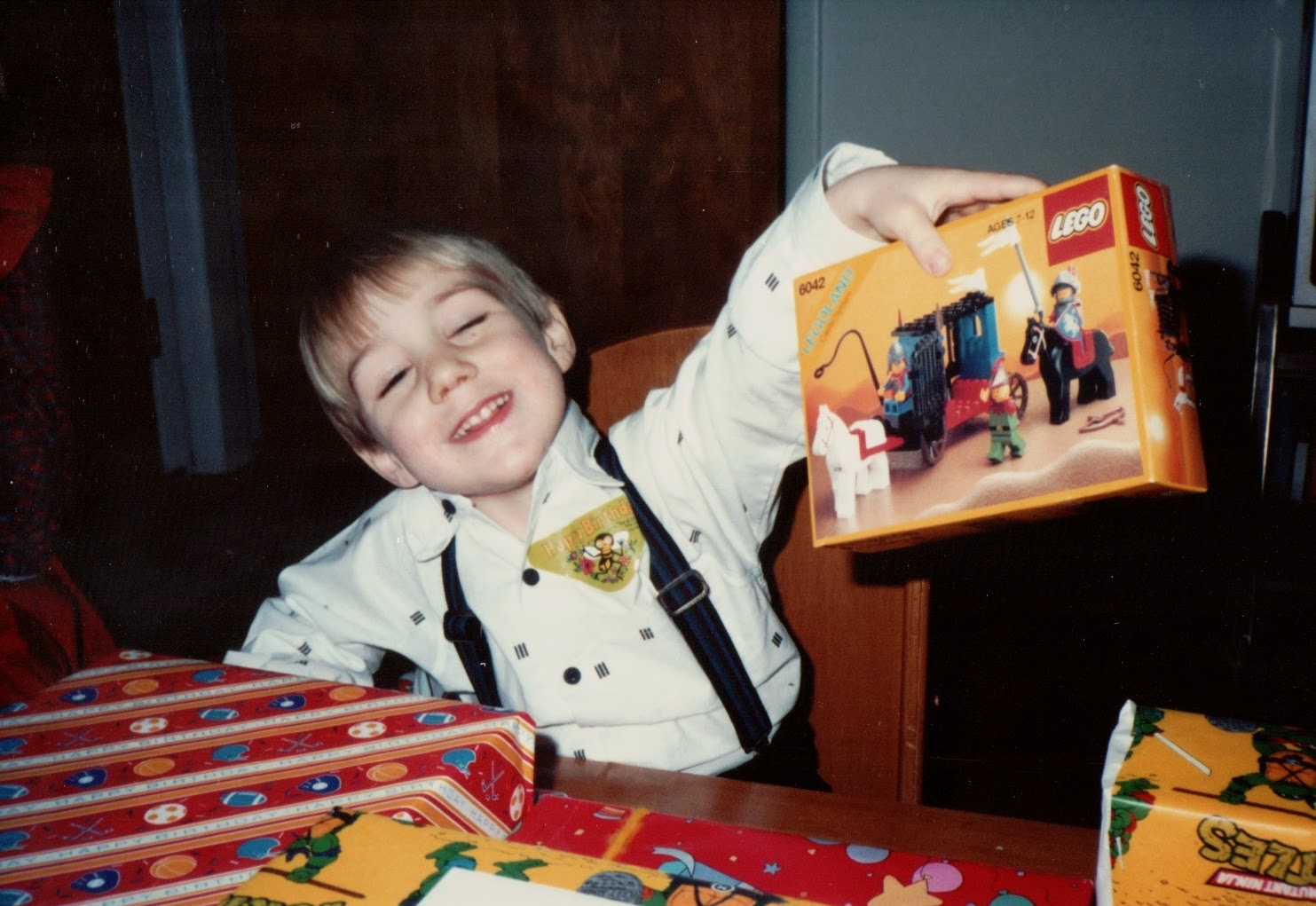 My tow-headed four year old was such a happy guy.  I loved his energy and enthusiasm for everything.  He had a smile on his face most of the time.  The sticker in the picture above was given to him by his preschool teacher.  Travis attended Woodlawn Preschool in Battle Creek, Michigan at the time. 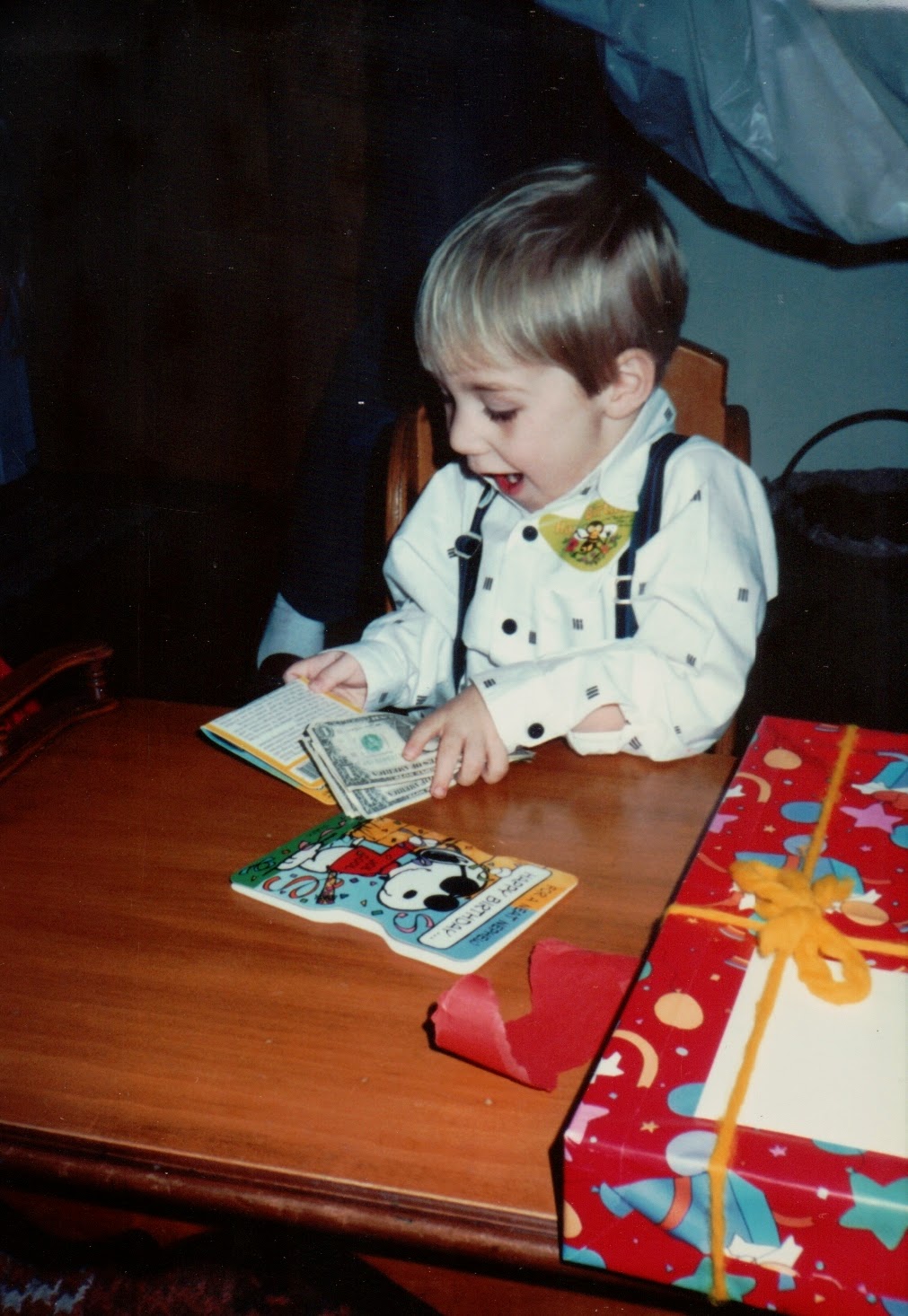 Another gift that Travis got excited about was money as you can see from his expression above. A trip to Toys R Us was usually in order the day after his birthday. 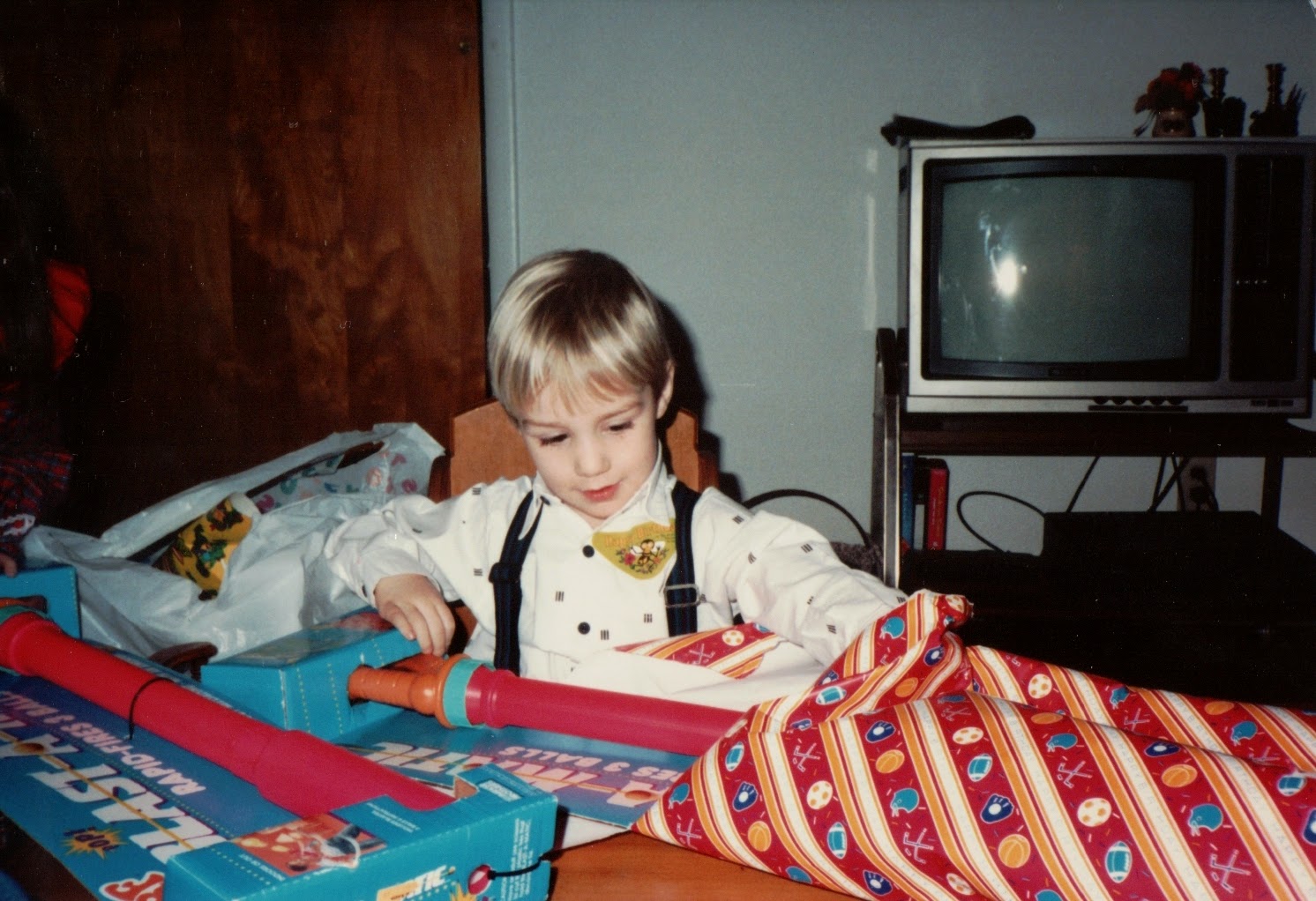 Nerf blast-a-matic toy pop gun was a big hit with Travis that year.  This Nerf gun shot little yellow, rubber balls out.  This would be one of many Nerf toys received throughout his childhood.  It is a wonder that nothing every got broken with that toy. 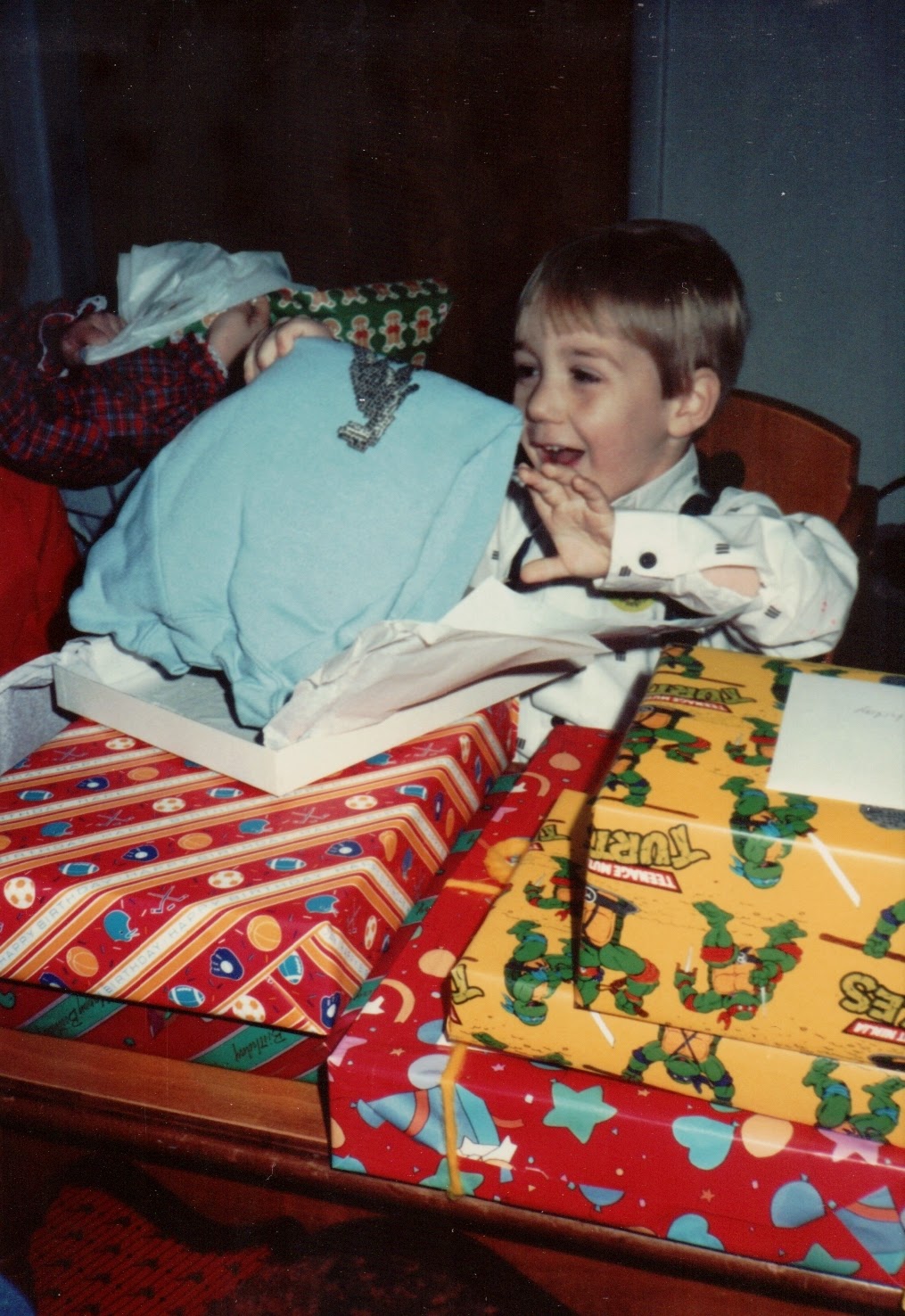 What boy doesn't like Dinosaurs?  The sweatshirt above was given to Travis by his Grandma and Grandpa Leyndyke.  The dinosaur on the sweatshirt was cross stitched on the shirt. He got a lot of wear out of this sweatshirt.

Another favorite character that Travis enjoyed at this age was Waldo.  Where's Waldo books would keep him occupied for hours.  Travis received a Waldo sweatshirt, book, and puzzle as well for his fourth birthday.

Celebrating birthdays as a family was a memorable part of Travis' childhood and his fourth birthday was one to remember.  Cowabunga, Dude and Happy Birthday, Travis.

Posted by Brenda Leyndyke at 7:50 AM