Finding an 1838 birth record for New York can be challenging when the earliest statewide registration began in 1847, so I needed to use other sources to verify Adeline Dyer's birth.  The first mention of Adeline's birth date was found in her husband's, Samuel Stillman Glover, Jr., civil war pension file, which I wrote about here. 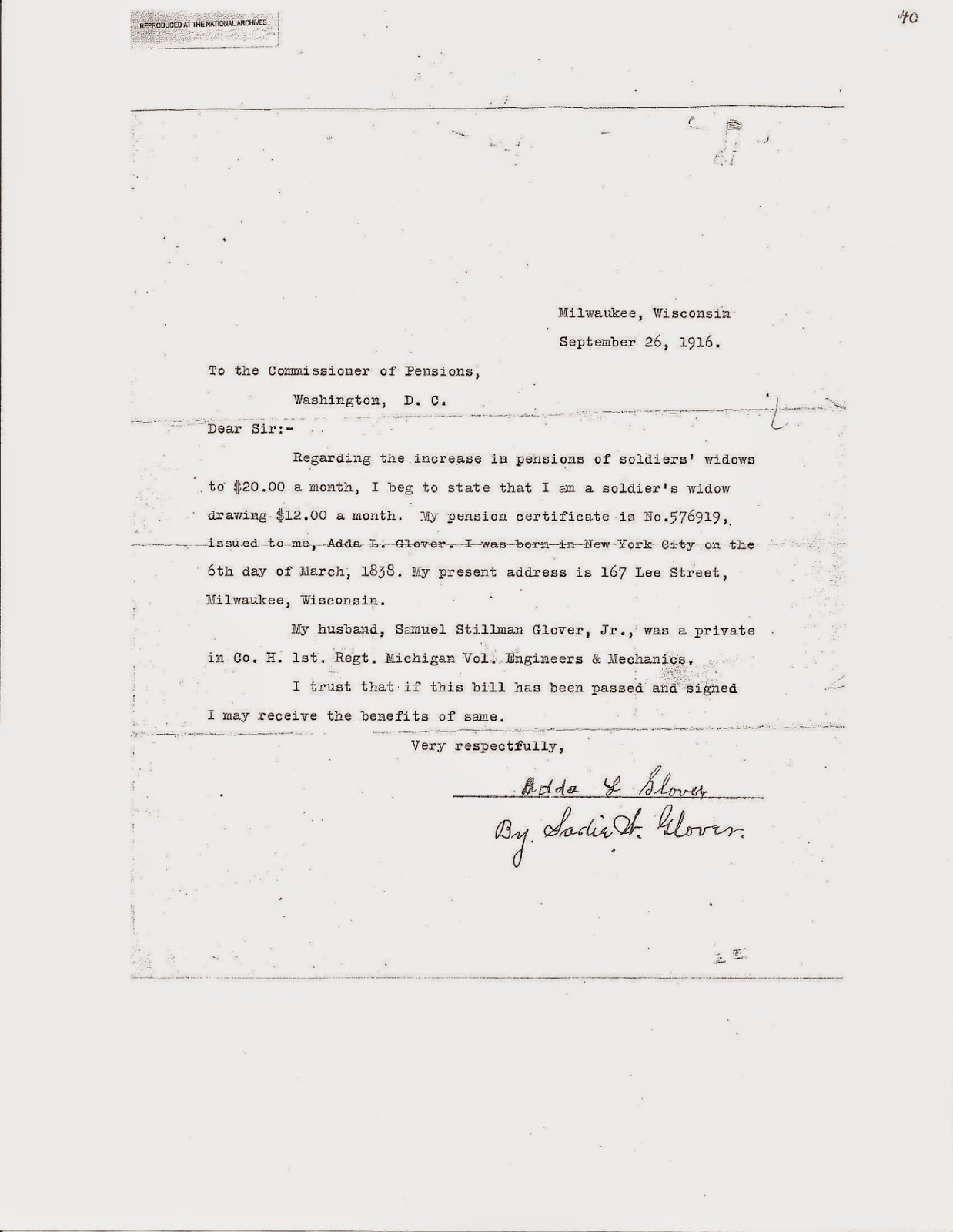 Adeline Dyer Glover states that she was born on 6 March 1838 in New York City. Further research has determined that her parents were William G. Dyer and Mary Ann Swallow.  I thought finding this information would satisfy me, but since it wasn't primary information I kept digging.

The source I turned to for further information was FamilySearch and the "New York, Births and Christenings, 1640-1962" online database.  I found an entry for the baptism of Adeline Dyer with a father, William Dyer and mother, Mary Ann.  I do believe I found my Adeline.  Since this is an index entry without an image I will need to find the actual document to confirm the accuracy of the information found but for now I have one more piece of Adeline's genealogical puzzle to work with. The information found is listed below:


One may look at this and wonder how I came to the conclusion that this was my Adeline Dyer.  The birth year on the transcribed index is 1835, three years earlier than Adeline reported in the pension file with the baptism taking place seven years later.  This information prompted me to look at the other records I have about Adeline.  This is the only record that deviates from the 1838 date for birth. Her marriage record, all census records, family Bible record, and death record is consistent with a 1838 birth year.  Since this is a transcription of an index, I need to look at the index myself and find the original record before I change her birth year to 1835. The only other explanation would be another child born to William and Mary Ann Dyer, named Adeline, who died before the second Adeline's birth.  I have found no evidence of that occurring. I made note of the discrepancy in my Roots Magic software. 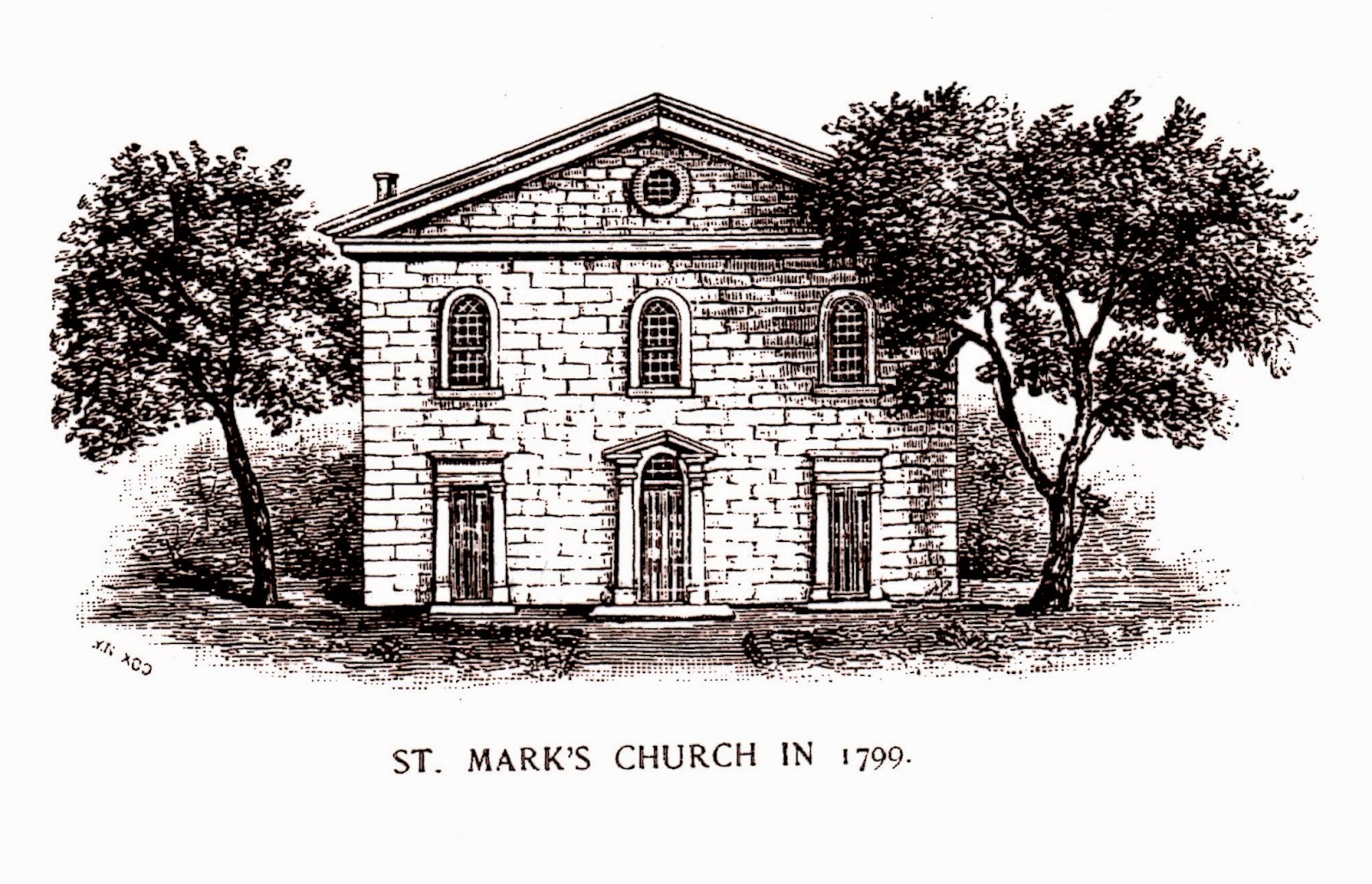 Next, I decided to do a little research on the church listed in the index, Saint Mark's Church, New York, New York.  St. Mark's-In-the-Bowery, 131 East 10th Street, is the official name of the church and has a rich history.  It is New York City's oldest site of continuous worship and the second oldest public building in Manhattan.

Petrus 'Peter' Stuyvesant, Governor of New Amsterdam, purchased the land the church is on, in 1651. He had built a family chapel on the land by 1660. Petrus' grandson, Petrus, sold the land to the Episcopal Church, in 1793, for one dollar. Governor Stuyvesant is buried beneath the church.

The building of St. Mark's-In-the-Bowery began with a cornerstone being laid in 1795.  The fieldstone Georgian style church was completed in 1799.  The church saw 200 summer worshipers and 70 winter ones by 1807. The steeple was erected in 1828, ten years before Adeline Dyer's birth.

St. Mark's In-the-Bowery has its place in New York City history.  It is a New York City landmark and part of the St. Mark's Historic District.  It is listed on the National Register of Historic Places. It is located in what is now East Village.

Although I still have to find the original records and analyze them, I feel confident that the Adeline Dyer who was baptised in St. Mark's-In-the-Bowery is my second great grandmother.
Posted by Brenda Leyndyke at 7:50 AM