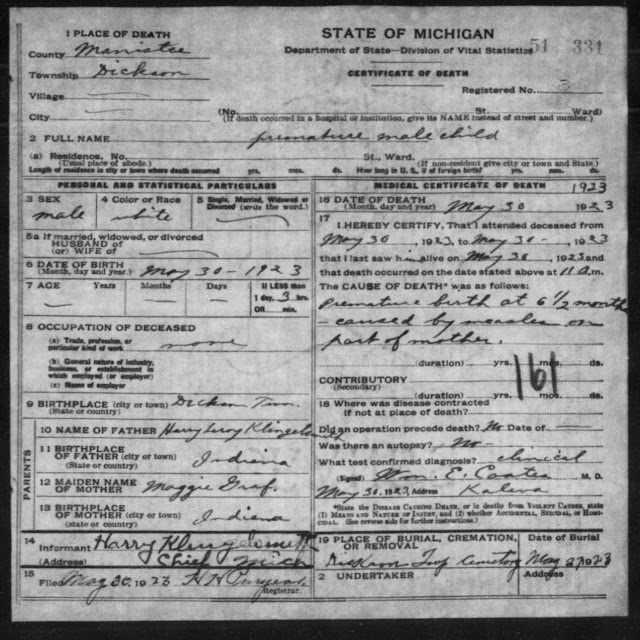 It was not unheard of in times past for mothers to give birth to numerous children. Not all children survived to adulthood. The reasons for twentieth century infant deaths included: lack of good prenatal care, low birth rate, maternal illness, congenital malformations, malnutrition, and infectious diseases to name a few.

In 1923, a death certificate was issued for a Premature Male Child. I don't know if this baby was given a name or not, but it was the baby of Maggie and Harry Klingelsmith, my great aunt and uncle. Baby Klingelsmith was born and died on 30 May 1923 in Dickson Township, Manistee, Michigan.

The measle vaccine wasn’t available until 1963. I remember having the measles and getting the vaccine. Vaccines saves lives. Today, they have a MMR titer blood test to check for measles, mumps, and rubella immunity. Even though I had all three of those childhood diseases, the MMR titer test showed I was not immune. I found this out after I gave birth to Travis. I was immunized at that time.

Aunt Maggie didn't have the advantage of a MMR titer or a vaccine. I am sure Premature Male Child wasn't the only child whose mother got the measles in the past. I'm sorry Aunt Maggie had to grieve the loss of her only son. I remember Aunt Maggie as a genuinely nice woman. She was my grandmother's sister and when we would visit Grandma Fredricks, she would pop in to say hi. Maggie did have one more child one year later in May of 1924.

The four children of Harry and Maggie Klingelsmith were Doris, Ernestine, Rachel, and Margaret.

Posted by Brenda Leyndyke at 6:52 AM