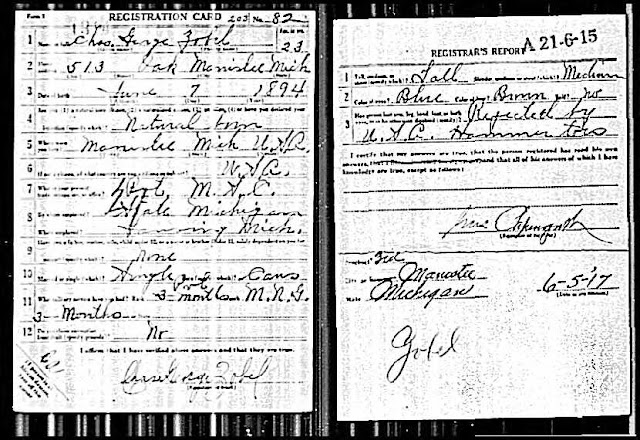 I like World War I draft registrations for the information it provides about the person. I have used this information to further my research.

Chas. George Zobel is my second cousin, once removed. One might wonder what I could gain from so distant a relative. The Zobel family has been a great source of information for my Fredrich family. Chas. grandmother, Henriette Fredrich Zobel, is the sister to my great grandfather, Johan August Fredrich. It was through Henriette that I found her and J. August's parents.

The above draft registration provides clues to learn more about Chas. I learned that in 1917 he was employed by MSC,State Michigan, Lansing, Michigan. I believe MSC was Michigan State College. I could look for further information there.

Also, he spent three months in the Michigan National Guard. Another line of research for me.

I learned about Chas's hammer toes that prevented him from serving at the time. I have never found any military records for Chas. and do not think he ever served.

World War I draft registrations are easy to find. Don't overlook them in your research. You never know what you might find.

Posted by Brenda Leyndyke at 7:58 AM