My father always told the story about his uncle, Merle Glover, running away to join the Army, during World War I. It wasn't until I found the document below that my father and I realized he was 15 when he joined the Canadian Army. Merle Glover was born 21 January 1902 in Michigan, United States.

The following Attestation Paper found at ancestry.com from the Canada, Soldiers of the First World War, 1914-1918 collection, has Merle attesting to the truth of the information on the form. His birth date on the form was listed as January 21th. 1898. His place of birth was listed as Kingston, Ontario. 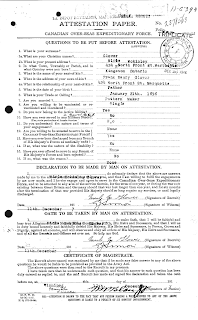 Merle Glover eventually made a career with the United States military. I don't know when he left the Canadian Army and joined the U.S. one. He rose to the rank of Lt. Colonel and served in the military for 33 years. His obituary says he is buried in Arlington National Cemetery, but I haven't been able to find his burial information at Arlington.

The Social Security Death Index above also states his date of birth as 21 January 1902.

I find it interesting that a young man of 15 would want to join the army so bad he would go to Canada, lie about his age to join, and continue to serve for many years to come. The patriotism and dedication of Merle is to be admired.