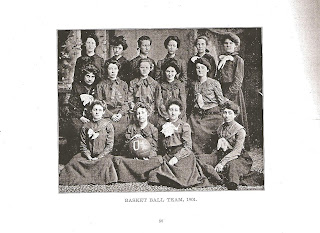 For the past month my family has been immersed in basketball. We even have a fun family pool to pick the winner of the NCAA Basketball Tournament. This year there are 17 members hoping to pick the winner for the right to brag for a year! (I chose West Virginia to win it all. If they win then I will be the one bragging!)

Basketball was invented by James Naismith in 1891. This picture, from Marquette High School in Marquette, Michigan, is of the women's basketball team in 1901-just 10 years after it was invented!

My grandmother, Sarah Lilla Watt, is the first one in the front row. I find this picture fascinating because I can't imagine playing basketball in a long skirt. Also, I was amazed that they had a women's basketball team in 1901. I graduated from high school in 1975 and until the Title IX education amendment of 1972 was passed, women's sports weren't as accessible as they are now. It makes me wonder was Marquette schools ahead of their time?
Posted by Brenda Leyndyke at 7:00 AM