Be Careful of What You Assume on Documents 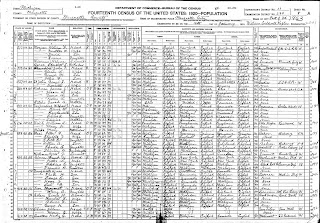 This is the 1920 U.S. Federal Census for the Frank H. Glover household in Marquette, Michigan. The people and relationship listed include: Line 33-Frank H. Glover, Head; Line 34-Hattie L., Wife; Line 35-Adeline E. , Daughter; Line 36-Francis H., grandson. One might assume that Francis H. is the son of Adeline E. from this record. This is not the case.

Francis Henry Glover was born 12 September 1915 in Detroit, Michigan to Harry Glover and Emma Winkler. Emma Winkler Glover died just 15 days later on 27 September 1915. Francis also known as Hank, went to live with his grandparents, Frank H. and Hattie L Glover as an infant. He lived with them until he was 12 years old. At this time he went to live with his father, Harry Glover and his second wife, Sarah Lilla Watt.

In conclusion, Adeline E. Glover in this census is 'Aunt Addie', not Francis H's mother.