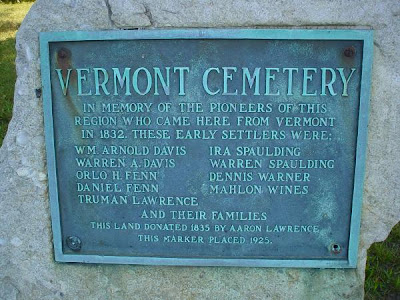 Vermont Cemetery is located on Chelsea-Manchester Road, Chelsea, Washtenaw County,Michigan. This plaque is in honor of the pioneer settlers who arrived in Washtenaw County in 1832, they were from Vermont.
Vermont Cemetery is the oldest burial place in Sylvan Township, Washtenaw County.  The first death in the township occurred in 1835.  There was no land set aside as a burial ground.  Aaron Lawrence donated a parcel of land for a burial place.  Eventually a Cemetery Association was formed and one more acre was added to the cemetery for a total of two acres. 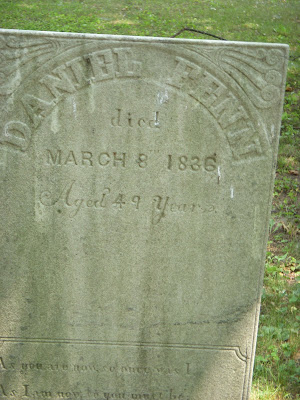 Daniel Fenn was one of the pioneer settlers from Vermont, settling here in 1833.  Very little is known about his ancestry.  Daniel Fenn was possibly born in Pittsford, Rutland, Vermont about 1787.   Daniel Fenn married Huldah Rowley 28 February 1808 in Shoreham, Addison, Vermont.  He died 8 March 1836 in Chelsea, Washtenaw, Michigan.
Posted by Brenda Leyndyke at 7:00 AM