Where Can You Find the Largest Monument to the Underground Railroad? 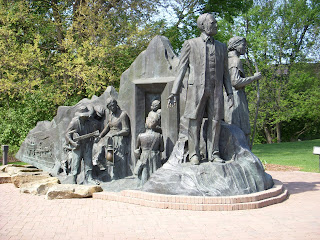 The nation's largest monument to the Underground Railroad can be found in Battle Creek, Michigan.  The 28 foot long and 14 foot high bronze statue was made possible by the generosity of the WK Kellogg Foundation and Glenn A. Cross Estate.  Sculptor Ed Dwight's monument can be found near WK Kellogg's House, entrance off of W. Van Buren Street.  The lovely park like setting with flower-lined pathways showcases the beauty of the statue.  A information kiosk is on site to provide further information. 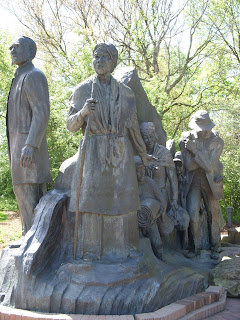 Erastus and Sarah Hussey were local conductors of the Underground Railroad.  Erastus Hussey claimed to have helped 1000 slaves as they passed through Battle Creek.  Battle Creek, Michigan was one of the underground railroad stops that fugitive slaves used on their way to Canada.

The statue depicts scenes of families escaping by horse drawn wagon, moving through a forest and seeking refuge in a cellar.
During the 1840's and 1850's historians estimate that 1500 fugitive slaves passed through Battle Creek.

If you are ever in Battle Creek, add the Underground Railroad Monument to you list to see.  And if the jeopardy answer is 'you will find the largest monument to the underground railroad here'  You can say, "What is Battle Creek, Michigan?"
Posted by Brenda Leyndyke at 7:00 AM