Samuel Stillman Glover Ex-Communicated and the Reason Shocked Me!

Those of us who are beyond researching the names and vital record dates of our ancestors and looking to fill in between the dashes, look for records that will help us in our journey to understand those ancestors better. I found more than I was looking for when a Glover researcher, Peter, sent me a few church records that he had found on my third great grandfather, Samuel Stillman Glover, Senior.

Peter and I share Samuel Stillman Glover as an ancestor.  We are both descended from Samuel through his children.  Peter through Samuel's daughter, Annette, and I through Samuel's son, Samuel Jr.  Peter was doing research at Ypsilanti Historical Museum Archives and shared church records that he found with me. 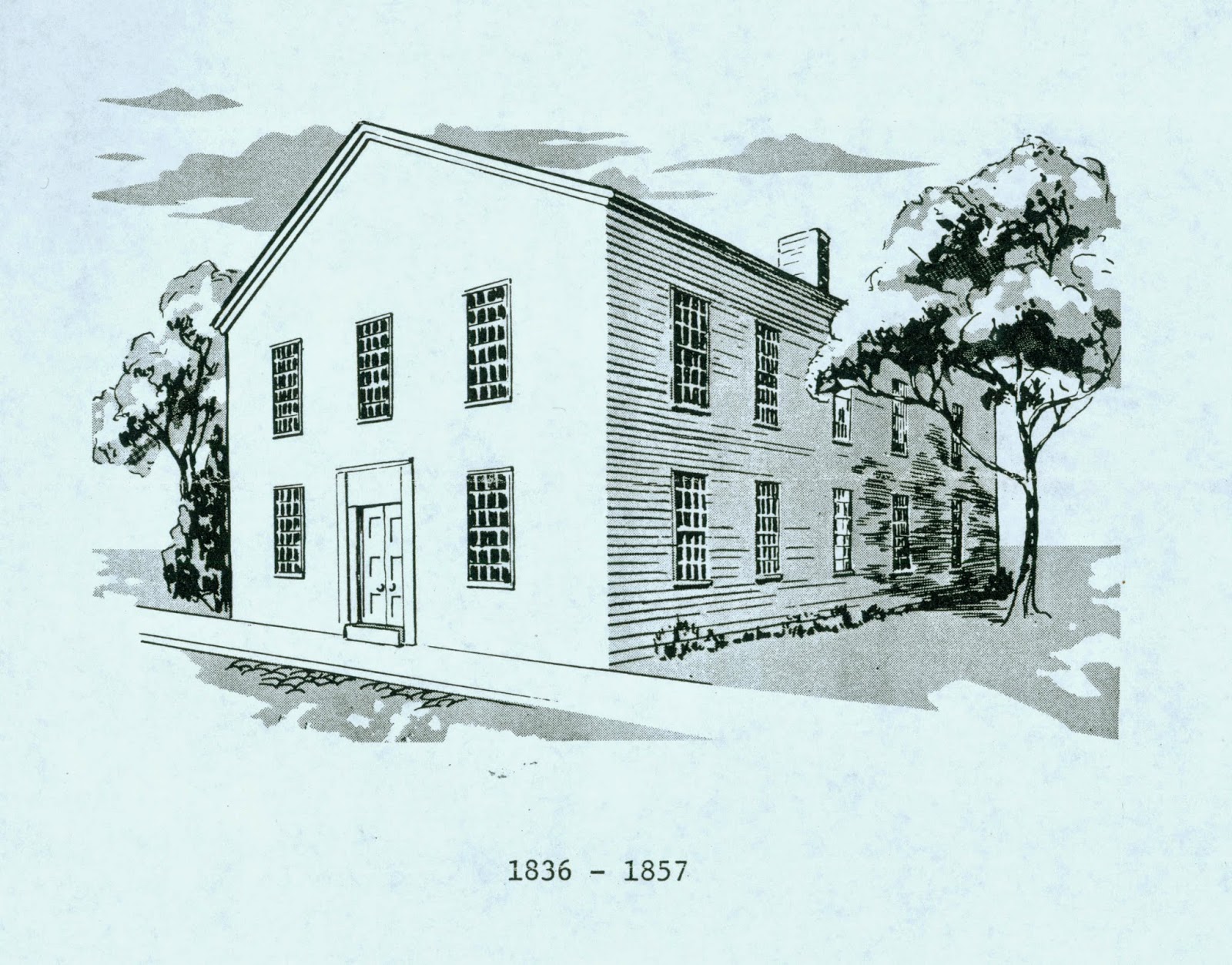 Who was Samuel Stillman Glover?

First, let me give you a little background on Samuel Stillman Glover.  Samuel was born in 1798 in Conway, Massachusetts to Alexander Glover and Sarah Salisbury. He married Vinera Eglantine Powers, the daughter of William and Lucy Powers, nee unknown, around 1817.  Samuel and Vinera were the parents of twelve children: William, Samuel W., Sarah, Alanson, Dennis, Samuel S., Daniel, Vinera, George, Annette, Henry and Polly (twins).  The twins died within two weeks of birth.  Vinera died about a month after giving birth on 14 February 1847, in Oceola Township, Livingston county, Michigan.

Samuel and Vinera lived in Phelps, New York before migrating to Michigan.  Samuel and Vinera were received into the First Presbyterian Church in Ypsilanti, Michigan on 2 January 1834 having transferred from "the church in Phelps".

It was sometime in early 1835 that session minutes recorded charges against Samuel:


"The clerk was directed to cite Samuel S. Glover to appear before them and answer to the following charges brought by common fame, viz.;

1.  For abusive treatment of his family, particularly his mother-in-law.
2.  For using profane language
also to give satisfaction for neglecting family and public worship."


Samuel appeared before the elders on 11 April 1835. The session minutes for this date state,

"Samuel S. Glover appeared and to the charges brought plead not guilty.

The names of the witnesses by whom the respective charges are expected to be sustanined were given to him and were as follows,

For breach of covenant in neglecting family prayer and public worship, he was admonished.

Session adjourned to meet in two weeks at 10 o'clock a.m. to attend to the case of Mr. Glover.


The next session where a quorum was present was 27 April 1835.  This is where my shock came from. Three pages of session notes were included here.


"On hearing that Mr. Glover had turned Mrs. Hyde, his mother-in-law out of doors, as a friendly neighbor I called upon him and introduced the subject.  Mr. G. said it was an unpleasant affair and was sorry it had happened.  He admitted that he ordered her out of the house if she would not cease her noise, that he was sorry it had happened. I thought from what Mr. Glover said that Mrs. Hyde had better return and consequently on going to see her I advised her to do so.  She consented to adhere to my advice provided that I would return with her which I did. On her return Mr. G. repeatedly asked her if he had not always treated her well.  I noticed that Mrs. Hyde evaded giving a direct answer to this question as often as it was put to her."


Next to testify was Mary Hammond,


"Soon after Mrs. Hyde left Mr. Glover's, I called at his house and while I was conversing with Mrs. Glover, Mr. Glover came in and spoke in very abusive and severe terms of his mother-in-law which very much surprised and grieved me."


Lucy Hyde's testimony is the one that shocked and saddened me.


"Since I came to live with Mr. Glover, which is something like two years, in a fretful manner he has spoken of my being a bill of expense to him and indulged in other remarks which very much wounded my feelings.  On the morning when I first left, in some conversation he became very angry, placed his hand upon me, pushed me towards the door and ordered me out. I obeyed and repaired to Mr. Sears, where Mr. Hammond found me. By the advice of Mr. Hammond I returned, after which nothing particularly unkind in his conduct occured for some days.  One evening on hearing some reports to his disadvantage about my first leaving, he became very much enraged and again ordered me out of doors.  I told him I would go in the morning and not before.  On my leaving in the morning he told me never to darken his doors again, and that if I rotted above ground he would never bury me.

In regard to his abuse of others of his family I consider he has frequently been guilty of it-particularly his wife. One time about a fortnight previous to his leaving the state of New York, I saw him take his wife by the throat and choke or push her over. Their son and myself interferred and he desisted. Since we arrived in the Territory I have seen him box or strike her repeatedly. On one occasion he took a large ox whip and shook it over head and swore by J_____ C______ that he would whip her.  I interferred and he put up the whip. At another time when bringing in potatoes on asking his wife to aid him, in taking the basket from his shoulders and she refusing he became angry and through(sic) some potatoes at her. I remonstraited(sic) with him and he stopped."

The session concluded with the following notes:


"Having finished the testimony on the first charge, proceeded to the second charge.  There being none of the witnesses present by whom, Mr. Glover has been informed, it was expected this charge would be sustained, by Mr. Glover's consent the witnesses present and which had already been sworn were introduced. After having asked a few questions, Mr. Glover became very angry, addressed the Session in very abusive language and refused to proceed any further with the trial. The Session accordingly cited him to appear before them at the usual place of worship on the 2nd of May at 1 o'clock p.m. to attend to the remaining parts of the trial. Joseph Sears, Dennis Hammond and Lucy Hyde, he was informed would be introduced to sustain the second charge."

The 2 May 1835 session starts and Samuel did not appear. Witnesses were Joseph Sears, D. Hammond, and Lucy Hyde.  The transcribed session notes stated,


"Session met agreeably to adjournment and began with prayer. Present I.M. Wead, Moderator, Ezra Carpenter, J. Bacon and J. Loomis, Elders.  Mr. Glover not appearing, the Rev. Root from Ohio was appointed to manage his case, agreeably to the rule provided in the Directory for such a case.

Mr. Joseph Sears testified as follows: "On some altercation occuring between me and Mr. Glover he called me a God damned frenchman."

Mr. D. Hammond testified and stated: "During last summer I frequently heard Mr. Glover when in a passion use the word, devilish and heard him call his children devils."

Lucy Hyde states, "I have heard Mr. Glover on two different occasions swear by J_____ C_____ and by God that he would whip his wife.  About a year ago I heard him swear by God that no one should work on the farm which was in possession of his brother in conjunction with himself."

The Elders found that the two charges were fully substantiated.  They also felt that the reasons for his neglect were not good.  The Elders further ruled that Samuel S. Glover be "suspended from the ordiances (sic)of the church for three months or until he makes satisfaction."

The next record in the Session minutes that I found was dated, 13 November 1835.  The notes were as follows:


"The Session met at the call of the Moderator.

The case of Samuel S. Glover was called up. He having been visited and labored with and still manifesting an unrelenting spirit and a contempt of the Session.

Therefore, resolved that Samuel S. Glover be and hereby is excommunicated from the Church of Jesus Christ.

All I can say is "Wow!" I am amazed at the detail that was found in these session records.  It isn't the most flattering account of Samuel and it has left me with many questions.  Why was Samuel abusive to his wife? Did her abuse his children? Was this a pattern of behavior passed down through generations?  And poor Vinera, or is her name Virena? It looks like she had a very hard and short life.  Vinera died in her 40's. Previously, I had written about Samuel leaving his children, moving to New York, and remarrying after his wife's death.  I wondered why he left such small children in Michigan.  Do I have an answer to that question in these records? I wonder what other records are available.  Samuel married again, but it only last a short time.  Did he abuse his second wife, Maria.

The Session Records of First Presbyterian Church in Ypsilanti, Michigan filled in between the dashes, alright. The records I found were heart breaking to me, but it helped me see a side of Samuel that I would not have found in a birth, marriage, or death record.  Don't limit your research to vital records.  Dig deeper, you won't be disappointed.

(Session records of First Presbyterian Church in Ypsilanti, Michigan can be found at the Ypsilanti Historical Society Archives.)
Posted by Brenda Leyndyke at 7:45 AM