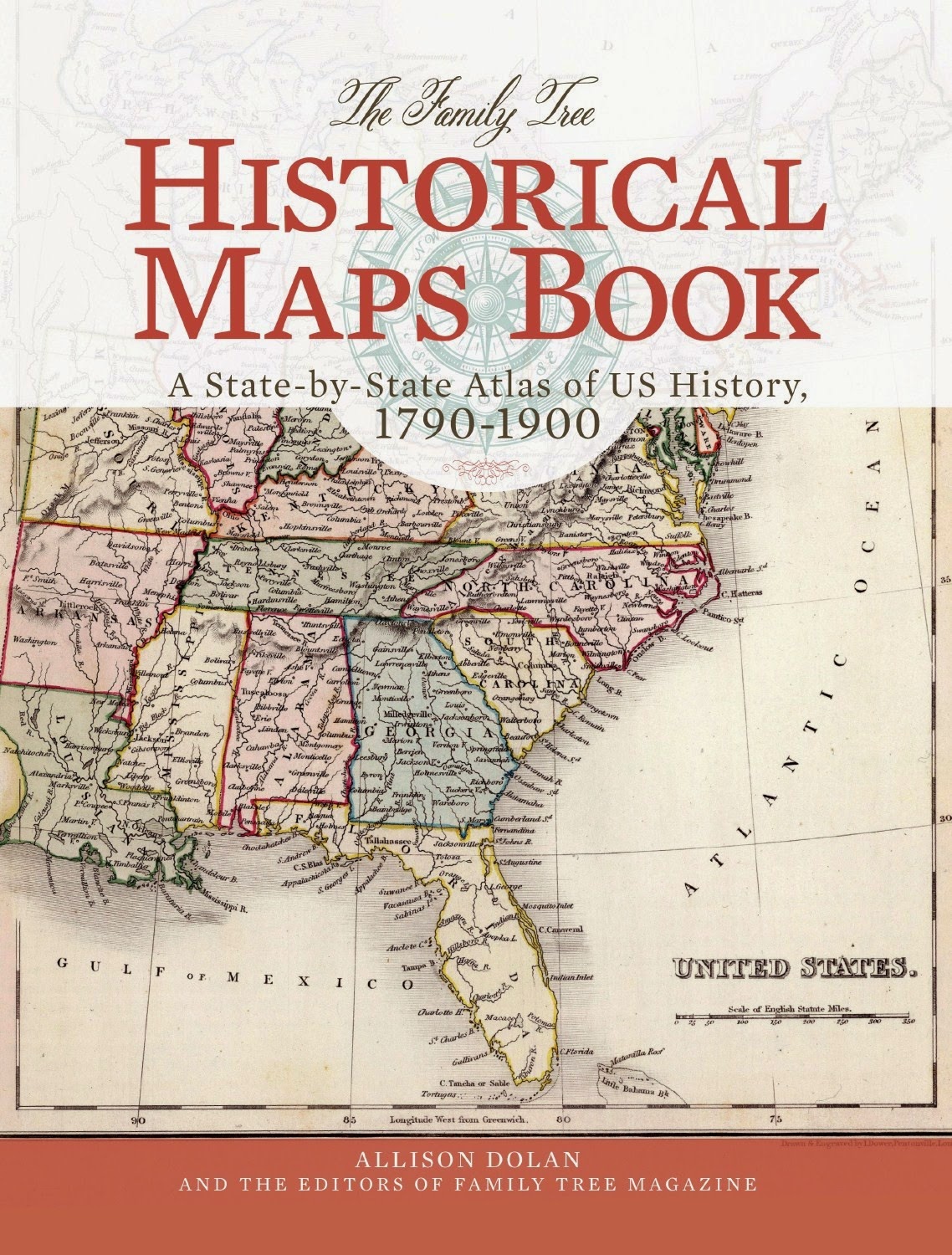 I bought the book because I wanted a concise, all in one, resource for historical maps. Plus, I like to look at old maps.  I like to envision my ancestors at the time. I enjoy looking at their migration trail and the terrain they would have traveled over to get from place to place.  Many of my ancestors were in the United States very early and these maps will help me to understand the changes in state and county borders.

Historical Maps Book is a wonderful atlas of full color map reproductions.  As the sub-title states the maps are from 1790-1900.  The book is laid out in a very easy to use format.  A two page introduction is followed by United States maps, individual state maps, special interest maps, and sources for maps.

One can follow the development of the United States in the thirteen maps depicting our nation's growth from 1755 to 1890.  Key dates in United States history are included.  These dates cover wars, land purchases, annexations, and more.

The United States maps are followed by the state pages.  The number of pages varies from state to state. The state pages include state maps from various times through its' history, key dates timeline, and occasionally, a city map.  Not all state pages have a city map.  The city maps seem to be for some of the larger cities.

For example, my home state of Michigan has ten maps over four pages.  One from the Michigan Territory, one of Detroit in 1889, and then the rest are of the state of Michigan at various times throughout history.  The key dates timeline includes seven dates from 1668, when Sault Ste. Marie was settled, to 1847, when Lansing was named the state capital.

The section of the book that I have spent a lot of time looking at is the Special Interest Maps pages.  Fifteen pages of maps are included in this section.  The maps cover topics such as population density in 1820, foreign population in 1880, average family sized in 1900 Census, Indian Tribes in 1600, taxation per capita, regional industries, deaths from known causes in 1890, climate map, San Francisco Earthquake zone, and more.  These maps go beyond what we think of as a map and show readers what was going on at different times in the United States.

Lastly, Historical Maps Book provides information on where each map came from.  Each state is listed and each map by date includes a source.

Overall, I find this book to be a beautifully laid out book with maps that show different era's in 200 years of United States growth.  The book centers around maps that are useful to genealogists and anytime a book makes my research easier, I am a fan.

Posted by Brenda Leyndyke at 4:29 PM