Richard McGee's family were pioneers in Canada West (Ontario) Canada, which I thought would make him an easier person to research than others.  Alas, this is not true.  I have been writing ancestor biographies since I started blogging and have been writing them in the order they appear on my pedigree chart.  I did not write one ancestor biography in 2014 because Richard McGee was the next ancestor to be highlighted.  I didn't think I had enough information to write one on him, but have decided to write up what I know and see where the blanks in my research are.

Trying to nail down a birth year for Richard McGee has been a challenge.  Just about every record I have found for him has a different year of birth.  Since I have not found an exact birthplace I have been unable to find a birth record.  For the time being, based on death records only, I am placing his birth year about 1835, in Ireland. The 1901 Census of Canada gives a date of birth as 24 May 1850, but since I am pretty sure he didn't father a child at age of 12, this is incorrect. Richard's daughter, Catherine McGee Watt, my paternal great grandmother, was born 2 September 1862.  My thoughts on the changes of birth year have to do with marrying his second wife, Mary, who was 24 years his junior. 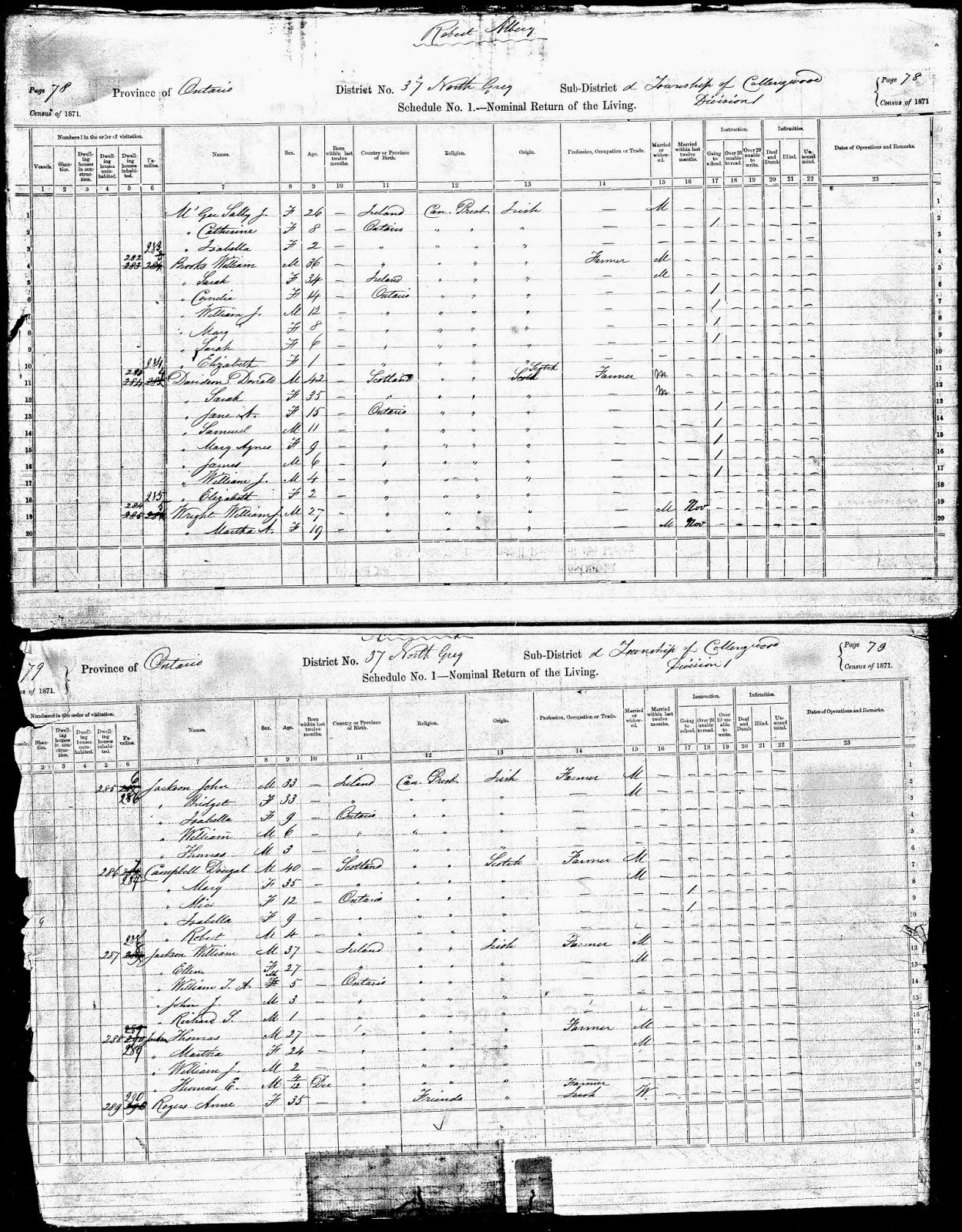 The first Canadian record I have found for Richard McGee is the 1871 Census of Canada, age 28 and birth year 1843.  He is living in Collingwood, Grey North, Ontario, Canada with his wife, Sally J, age 26; Catherine, age 8; and Isabella, age 2.

Richard married Sarah Jackson about 1861-1862.  I base this date on the fact that Sarah is found living with her parents in the 1861 Census of Canada and their first born child, Catherine, was born in 1862.  A marriage record for Richard and Sarah has not been found and further research in Ontario, Canada will be needed to confirm their marriage.

Richard's information on successive census is uniform in the areas of Birthplace-Ireland and Occupation-Farmer.  Otherwise, nothing is the same from census year to census year.  Year of birth is recorded as 1824, 1841, 1843, and 1850.  Religion is recorded as Church of England, Methodist, and English.  Obviously, I have a lot of work to do with Richard McGee's research.

Richard and Sarah McGee were the parents of four children:


Richard McGee lost his wife, Sarah, on 11 May 1877, just two and a half months after the birth of their son, James.  Sarah died in Collingwood, Simcoe, Ontario, Canada and is buried in Thornbury-Clarksburg Union Cemetery, Collingwood Township, Grey, Ontario, Canada.  (Note: Collingwood has been a part of Grey and Simcoe counties.  I have tried to use the county it was in at the time of the record.)

Richard marries Mary May, prior to March of 1881, when their first daughter is born. Richard and Mary can be found in the 1881 Census of Canada.  Richard, age 40; Mary, age 22; Catherine, age 18; Isabella, age 13; William J, age 9 (all Richard and Sarah's children) and Margaret, age 1 month.  There is no James McGee living with Richard and Mary.  I wonder if James' birth was a difficult one and resulted in his death, and Sarah's shortly after.

Richard and Mary May were the parents of  seven children:
All seven children are living with Richard, age 50, and Mary, age 42, in the 1901 Census of Canada. 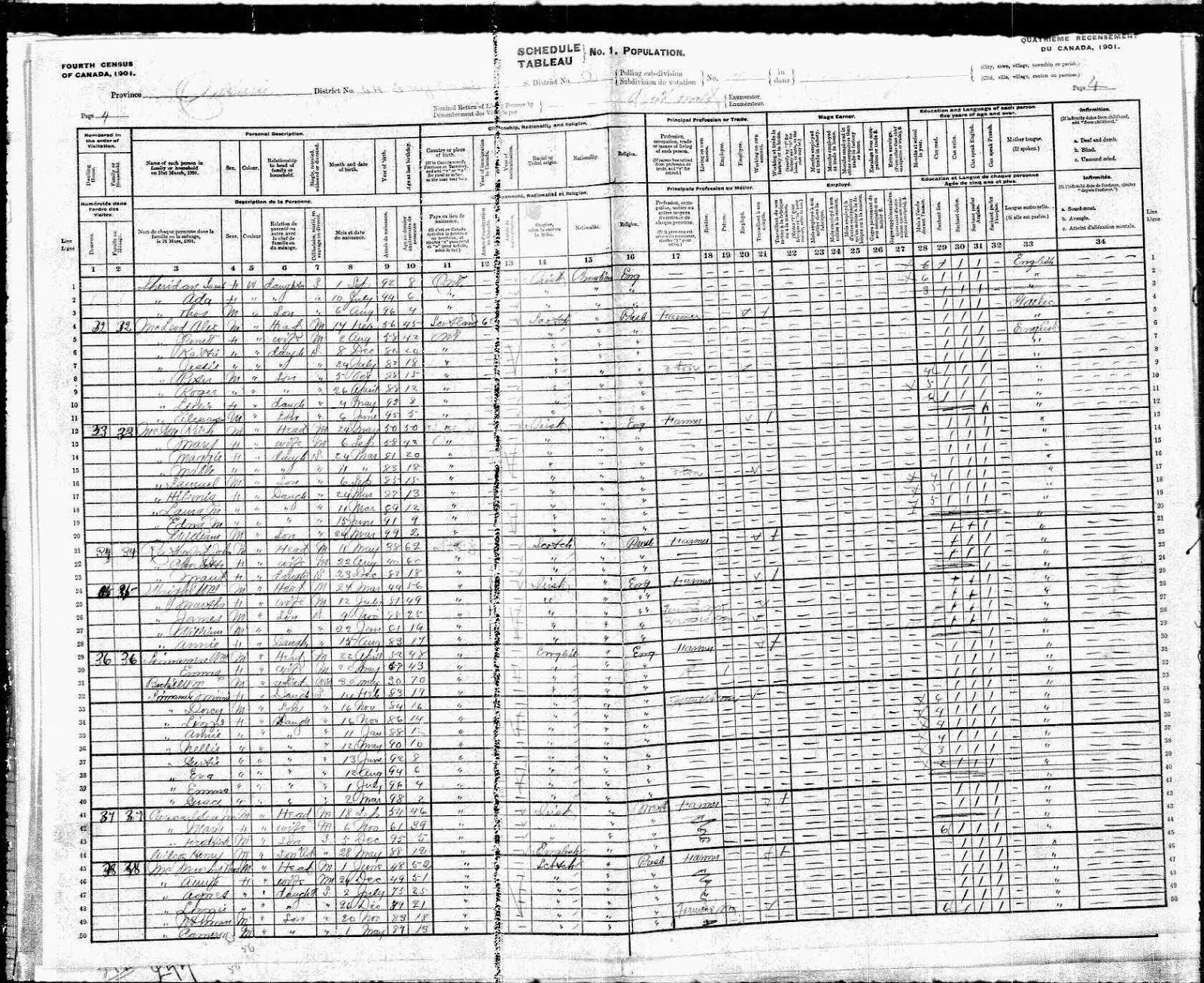 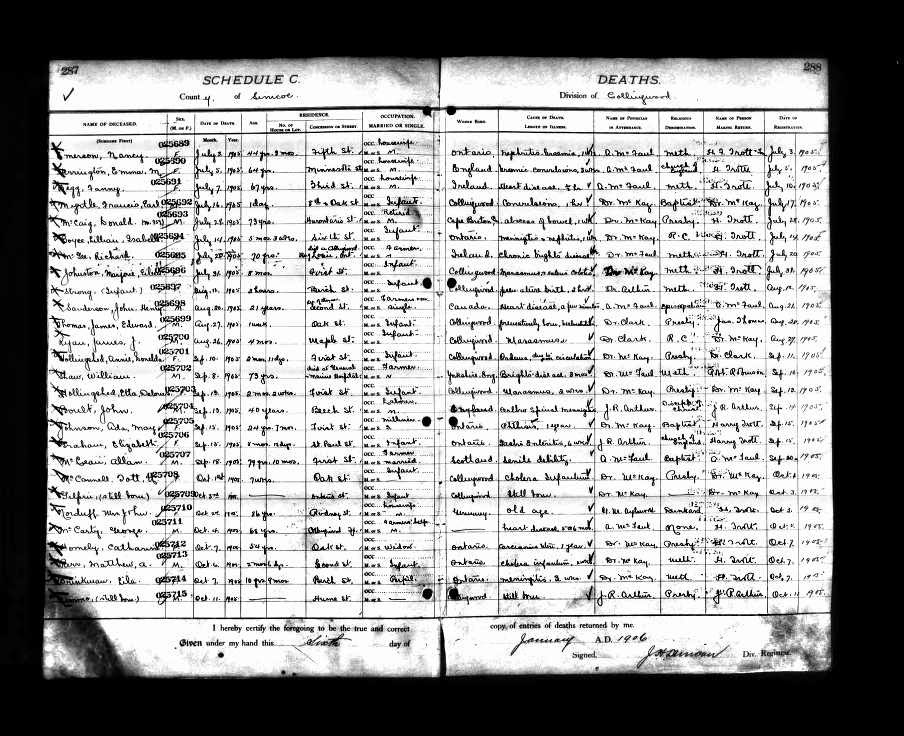 Richard McGee's biography has been filled with information on his family and census records.  There is so much more to know about Richard.  I believe a trip to the Collingwood area in Ontario is going to be needed to know more about Richard and his life. Further research is needed in the areas of land records, immigration, and church records.