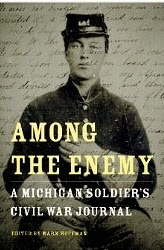 I first heard about the Kimball manuscript, which "Among the Enemy" presents, when I read Mark Hoffman's book, My Brave Mechanics.  I put a 'To Do' list item in my genealogy software program to find the manuscript and read it.  Mark Hoffman used the manuscript as a source for information about my Civil War veteran ancestor, Samuel Stillman Glover, Jr.

I never went to the Burton Historical Collection of the Detroit Public Library, where the manuscript/papers are kept, but I was at the Michigan Historical Center in Lansing, Michigan and browsing through their museum gift store when I saw the book, "Among the Enemy" edited by Mark Hoffman.  Of course, I bought it after seeing it contained Kimball's journal entries.

William Horton Kimball was a member of the First Michigan Engineers and Mechanics during the Civil War. His personal writings are what make up what I call the Kimball manuscript.  The manuscript is two books that includes a memorandum volume and a ledger.

Kimball shared, through writing, his experience during three years of union civil war service. Kimball included detailed accounts of combat and guerrilla warfare, interactions with civilians, personal opinions of military leaders and more. Mark Hoffman has taken Kimball's manuscript and added to it.

Among the Enemy: A Michigan Soldier's Civil War Journal edited by Mark Hoffman provides the reader with unique insight into the life of a civil war soldier, especially one who is in the background of the conflict. Hoffman states, "I have intentionally tried to let Kimball tell his own story, providing only introductory and contextual material in each chapter and limiting footnotes." (p3)  Hoffman has spent many years researching the civil war and has read many Civil War diaries and journals.  He "considers Kimball's to be among the most interesting and valuable..."(p1).

Hoffman starts his book with a short introduction, followed by Chapter 1, "Off to War".  This chapter's introduction provides a biographical sketch of William Horton Kimball.  Kimball's journal starts in September of 1861 when he decides to enlist and continues until 17 November 1864, when Kimball arrives home to Jackson, Michigan.

Other chapters detail the work that the First Michigan Engineers and Mechanics did in such places as Kentucky and Tennessee, building and repairing bridges and railroads in order to keep supply lines open as well as support troop movements. Each succeeding chapter is filled with Kimball's words describing his experiences through short journal entries, all of which are dated.

Additionally, Among the Enemy, includes maps and pictures which adds to this wonderful work about the civil war. Hoffman's book was well written and I appreciated being allowed to experience the Civil War through Kimball's eyes.

A footnote was added at the bottom of the page, "Samuel S. Glover of Company H was shot in the thigh on July 13 near Fayetteville, Tennessee, while carrying dispatches to Buell's headquarters. He was discharged by the surgeon on account of the wounds, which still bothered him decades later." (p57)

My research of Samuel Stillman Glover, Jr. through his compiled military service record and pension record confirms what Kimball wrote. Samuel volunteered to carry dispatches to General Buell's headquarters in Huntsville, Alabama. He was attacked by guerrillas and shot in his right knee.  He clung to his horse until he met the 35 Indiana, from there the dispatches were sent to Huntsville.

I highly recommend Mark Hoffman's Among the Enemy book to anyone who has an interest in Civil War history.  Hoffman's introductions adds context to Kimball's journal entries and allows the reader to see the Civil War through the eyes of someone who was there, William Horton Kimball.  It is an experience you won't want to miss.


Posted by Brenda Leyndyke at 7:47 AM