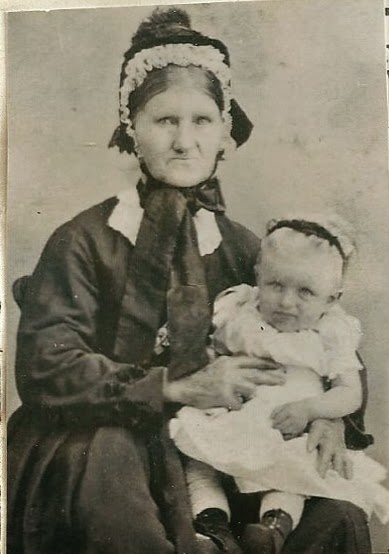 Susanna Koenig Fredrich, my second great grandmother, has been the source of a couple of "geneadances"!  No one in the family knew that she came to the United States and lived in Manistee, Michigan for many years.  The family believed that she had stayed in Germany.

I found Susanna's obituary on a research trip to Manistee, Michigan.  I visited the local library and looked up obituaries and found hers.  Although, the obituary is short there is enough information to know that this is the Susanna Fredrich I am researching.  There are a couple of mistakes in this obituary. One, Mrs. Radtke is a granddaughter.  Secondly, Oak Grove Cemetery, in Manistee, has no record of her burial there.


The obituary and transcription are below. 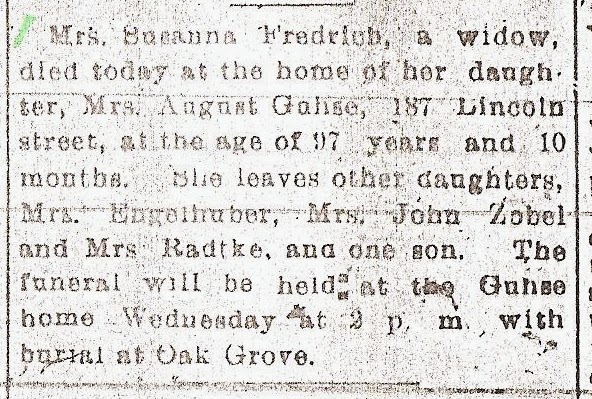 Transcription:
Mrs. Susanna Fredrich, a widow, died today at the home of her daughter, Mrs. August Guhse, 187 Lincoln street, at the age of 97 years and 10 months.  She leaves other daughters, Mrs. Engelhuber, Mrs. John Zobel, and Mrs. Radtke, and one son.  The funeral will be held at the Guhse home Wednesday at 2 p.m. with burial at Oak Grove.
Posted by Brenda Leyndyke at 7:55 AM