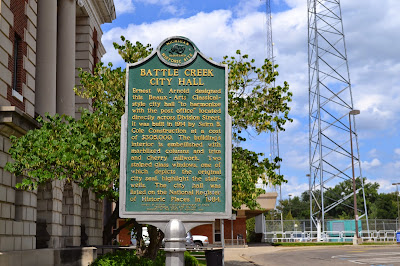 BATTLE CREEK
CITY HALL
Ernest W. Arnold designed
this Beaux-Arts Classical-
style city hall "to harmonize
with the "post office" located
directly across Division Street.
It was built in 1914 by Seirn B.
Cole Construction at a cost
of $305,000.  The building's
interior is embellished with
marblized columns and trim
and cherry millwork.  Two
stained glass windows, one of
which depicts the original
city seal, highlight the stair-
wells.  The city hall was
listed on the National Register
of Historic Places in 1984. 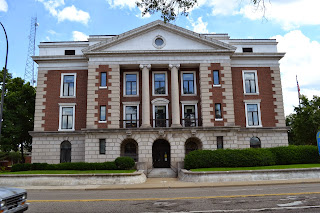 The business of Battle Creek, also known as the Cereal City, is conducted within the walls of the historic city hall building.  City Hall may be found at 10 North Division Street, Battle Creek, Michigan.  It is over 100 years old, having opened on 31 October 1914.  Columns of marble and cherry wood trim can be found throughout City Hall.  Historic pictures of Battle Creek and early politicians are hung on the walls throughout the three floors.

The landing between the second and third floors has two stained glass windows.  One of the windows has the first seal of the City of Battle Creek. It is far from politically correct today as it shows a surveyor clubbing a Native American.  To read more about the city seal, click here. 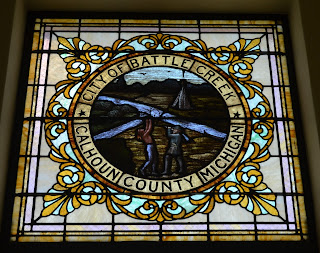 The original seal of the City of Battle Creek, Michigan 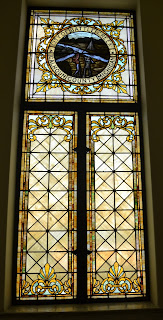 One of two stained glass windows on the landing between the second and third floors.