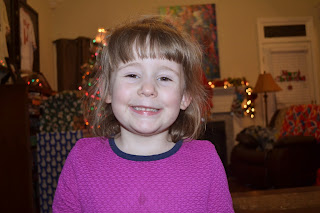 My niece, Cutie Pie, turns five today!  Happy Birthday, Cutie Pie!  Cutie Pie and her family live in another state than I do. I don't see her as often as I would like to, but this past December my husband and I drove my parents to see Cutie Pie's family for Christmas.  It has been awhile since I have celebrated Christmas with young children and I loved it.  I tried to make the most of my time with Cutie Pie and her brother, Lord Stanley while I was there. 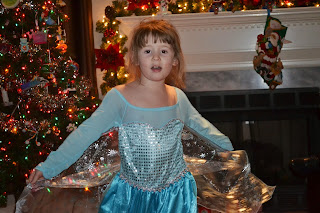 Cutie Pie is in full on "Frozen" mode!  She isn't a fan of Olaf, though.  Needless to say Santa knew about this and her gifts had a lot of Frozen items included.  She delighted us, in full Elsa costume, with a song and dance of "Let it Go".  This brought back so many memories of when my daughter, Kirsten, would dance and sing that I gave "Elsa" a standing ovation. Cutie Pie did a great job of singing and dancing. Cutie Pie loves to dress up and I got to see her as Elsa from Frozen and Tinkerbell from Peter Pan. 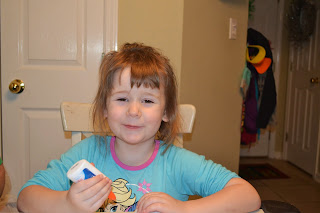 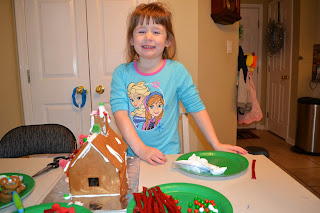 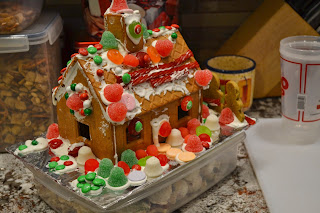 Cutie Pie and I had a lot of fun during Christmas vacation.  We created crafts, including a Santa Claus made from her hand print. She painted two snowflake pictures on canvas to give to her mom for Christmas.  Cutie Pie and I even decorated a gingerbread house.  We spent some time watching animated movies on my Netflix account.  Now, I am still getting recommendations of movies to watch and it brings a smile to my face when I see The Pirate Fairy recommendations! 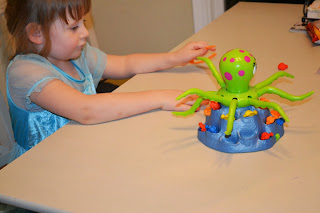 Once Christmas and Santa arrived we had more toys to play with.  I had bought Cutie Pie a game called "Jolly Octopus".  It is a mechanical one where the octopus tentacles go up and down while the player is using tweezers to collect little crabs. Cutie Pie was a whiz at that.  Another game I bought her was "Take the Cake". Cutie Pie wasn't too sure of it as the box had a creepy face on it, but when we played this shape sorting, cupcake decorating game, she liked it. 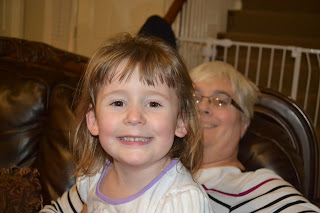 Cutie Pie and I taking a break from playing. 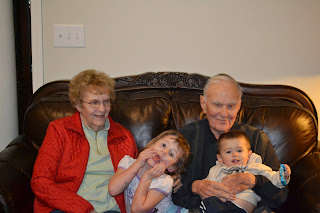 Cutie Pie is an adorable four year old, now five, with boundless energy, a sweet disposition and great smile. She is an awesome big sister.  I thoroughly enjoyed every minute I spent with her and I hope she has an awesome birthday.  The last day we were there I tried to take a picture of Cutie Pie and Lord Stanley with their grandparents. As the picture above shows, that wasn't an easy task, but boy what memories were made. 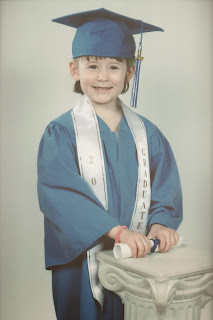 Cutie Pie will be leaving Preschool and entering Kindergarten in the fall, look out world here comes an awesome little girl ready to take on school and all it has to offer. 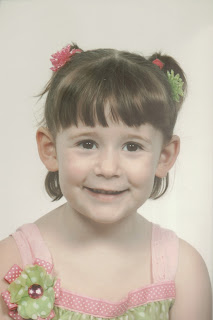 Have an absolutely, beautiful, awesome, tremendous birthday and have a piece of cake for me.  I will be thinking of you.  I love you, Cutie Pie.

(Lord Stanley and Cutie Pie are nicknames I have chosen to use for my nephew and niece on this blog to protect their identity at such a young age.)

Posted by Brenda Leyndyke at 7:38 AM