It is so much easier to do research when it is in the town you live in.  Such was the case when I went to my local library, Helen Warner Branch of Willard Library in Battle Creek, Michigan to do newspaper research.  The Battle Creek Enquirer is digitized and available at the library.  I can access issues from 1846-1923 from my computer at home with my library card, but for 1924 to the present a visit to the library is needed.

The Battle Creek Enquirer published articles during World War II under "News of Our Men in the Services" section. It was here that I found numerous articles about my dad's first cousins Jack and James Tyson, the sons of Victor and Adeline(Glover) Tyson. 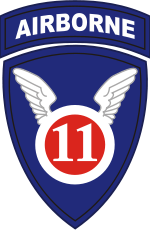 The 11th Airborne Division was transferred to the Pacific Theater in June of 1944.  Its first action was on the island of Leyte in the Philippines, which the below article is about. This division saw action with the invasion of Luzon and Manila, and conducted a raid on Los Banos internment camp in the Philippines. 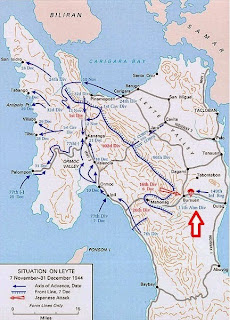 I have left the article as it was written at the time in 1945, it is not politically correct by today's standards. 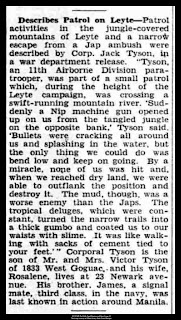 Describes Patrol on Leyte-Patrol activities in the jungle covered mountains of Leyte and a narrow escape from a Jap ambush were described by Corp. Jack Tyson, in a war department release. "Tyson, an 11th Airborne Division paratrooper, was part of a small patrol which, during the height of the Leyte campaign, was crossing a swift running mountain river. Suddenly a nip machine gun opened up on us from the tangled jungle on the opposite bank, Tyson said. Bullets were cracking all around us and splashing in the water, but the only thing we could do was bend low and keep on going. By a miracle, none of us was hit and when we reach dry land, we were able to outflank the position and destroy it. The mud though, was a worse enemy than the Japs. The tropical deluges, which were constant, turn the narrow trails into a thick gumbo and coated us to our waist with slime. It was like walking with sacks of cement tied to your feet." Corporal Tyson is the son of Mr. and Mrs. Victor Tyson of 1833 West Goguac, and his wife Rosalene lives at 23 Newark avenue. His brother James a signal mate, third class, in the Navy, was last known in action around Manila.