Michigan is said to have two seasons: Winter and Construction!  Construction season is well underway in my hometown of Battle Creek.  One of the projects in progress is a road construction project on Territorial Road.

Territorial Road is one of the oldest roads in the area.  It went from Southwest Michigan to Detroit about a century ago.  The recent construction project unearthed logs that made up the road at this time.  These logs were part of what is known as a "corduroy" road. 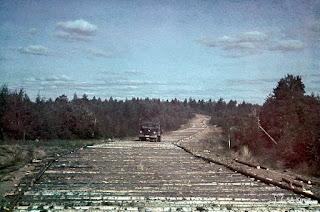 Example of a corduroy road in 1945, not Territorial Road
Source: (SA-kuva) [Public domain], via Wikimedia Commons 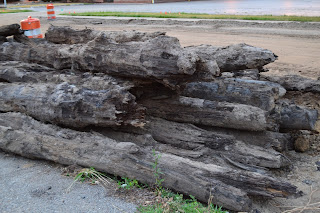 Logs removed from Territorial Road, with road in background

The unearthing of the Territorial corduroy road made for good news copy.  The local news stations, newspapers and radio reported this information.  It was even mentioned by the Battle Creek Regional History Museum's Facebook page.  The history museum was seeking people who would be interested in preserving the historic logs. 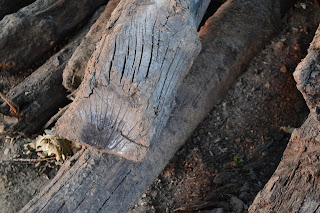 I thought I needed to see what the fuss was all about. The logs were stacked at the corner of Territorial Road and Woodrow Avenue.  In the back of my mind I was thinking of ways I could incorporate one of these logs in to my landscaping.  Holy Logs!  These logs are huge.  There would be no way to get the logs home, at least without my husband and I putting our backs out and a hernia or two.

I had to be content to take pictures and blog about the unearthing of this historic Battle Creek Michigan road.
Posted by Brenda Leyndyke at 7:05 AM