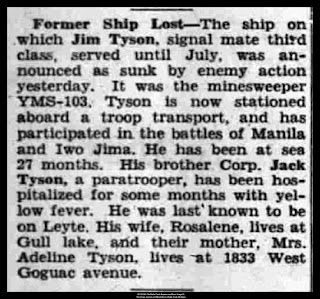 Source: May 16, 1945 Battle Creek Enquirer page ten, column one "News of Our Men in the Services."

Former Ship Lost- the ship on which Jim Tyson, signal mate third class, served until July, was announced as sunk by enemy action yesterday. It was the minesweeper YMS  103. Tyson is now stationed aboard a troop transport, and has participated in the battles of Manila and Iwo Jima. He has been at sea 27 months. His brother Corp. Jack Tyson, a paratrooper, has been hospitalized for some months with yellow fever. He was last known to be on Leyte. His wife, Rosalene, lives at Gull Lake, and their mother, Mrs. Adeline Tyson, lives at 1833 West Goguac avenue.

Can you imagine being a service person and learning that the ship you had been serving on was sunk? That is what happened to my dad's first cousin, James Tyson. The article above informs the readers of James' hometown, Battle Creek, about it.

The Battle Creek Enquirer had a regular column, "News of Our Men in the Services" that was published during World War II.  The articles focused on area service personnel news. I have conducted research using newspapers from various areas during World War II.  The one thing I have found in all of those papers is the patriotic spirit of the hometowns.  The articles are a wonderful history of the time and the support the community had for the young men and women who were serving at the time. I have found these articles helpful with my family history research.

The articles add details to my family history that I might not find elsewhere, easily. This article tells me about his former ship, where James is stationed now, the battles he participated in, how long he has been at sea, his brother's name, his brother's illness, and family ties.

James Victor Tyson was the son of Victor Tyson and Adeline Glover Tyson.  He was just 20 years old at the time of this article.