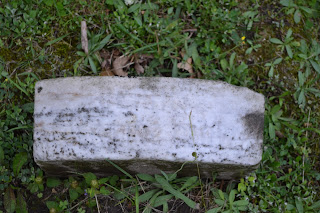 She is buried in Highland Cemetery, in Ypsilanti, in Lot 21, Block 10, the same lot as her parents. Cephise was almost seven years old when she died.  1853 was before Michigan began keeping death records and I don't know her cause of death.

The gravestone is almost covered with earth.  It is almost impossible to read and if it wasn't for the sexton records at Highland Cemetery, I would not have known that this was Cephise's grave.
Posted by Brenda Leyndyke at 7:35 AM