Using "The Expansion of New England" for Genealogical Research 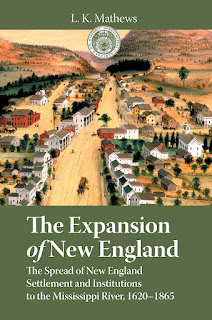 Are looking for resources that will further your research of your New England ancestors?  I have found one you may not have thought of using for research. L. K. Mathews wrote, "The Expansion of New England: The Spread of New England Settlement and Institutions to the Mississippi River, 1620-1865" and it was published in 1909.  New England Historic Genealogical Society republished it in 2012 and I bought a copy.  I wanted to learn more about my New England ancestors and the times in which they lived.  I knew that my colonial ancestors did not stay in Massachusetts their whole life, so where did they go?

The Expansion of New England can help answer that question. The book helps to explain the migration of the early settlers and the reasons they may have moved. The book starts with the spread from the settlement of New Plymouth to the "first offshoots" to Massachusetts, to New Hampshire, Maine, and Connecticut settlements. Further migration continued up and down the Atlantic coastline and by inland rivers and streams.  Eventually, migration sent settlers to New York, Pennsylvania, Ohio, Michigan, Wisconsin, and Northern Illinois and Indiana. It follows New England's westward migration to 1865.

Mathews ten chapter book is filled with over 30 maps from the early 1600's to 1860. It tells the story of New England migration; the role religion played in migration, the travel patterns of whole communities, the effect of wars, the harshness of the wilderness, and the influence the settlers had on new settlements. The book is filled with additional sources that genealogist like to use.  The footnotes alone are worth reading for research sources.  Many of these sources will lead you to information about your ancestors and the places they lived.

How did "The Expansion of New England" help in my research?  I will use the Rowley family as an example.  Henry Rowley came to New England around 1632 and settled in Scituate, one of the first communities to settle beyond Plymouth.  He removed to Barnstable where we find him living in 1639.  He dies by 1673, possibly in Succanesett.

Henry's son, Moses, Sr. marries in Barnstable and purchases property, in 1677, in Succanesett, which later becomes Falmouth.  In 1692, Moses, Sr. is in East Haddam, CT.  Moses, Jr. lives most of his life in East Haddam.  Jonathan Rowley, son of Moses, Jr., migrates to Kent, CT. His son, Jonathan, Jr. migrates to Pittsford, in Central Vermont, by 1773. Jonathan's Jr. son, Hopkins migrates to Shoreham, VT and his daughter, Huldah, migrates to the Michigan frontier in 1833.

Most of this research was conducted using census, land, and probate records. Suppose you had Jonathan Rowley, Sr. in Kent, CT, but could not find his children. The Expansion of New England can help.  In fact, the Rowley family migration mirrors the migration pattern found in this book.  Or suppose you have Hopkins Rowley in Vermont in the early days of Vermont's settlement, but have no clue where he came from.  The Expansion of New England could help you explore new areas.

In fact, I did a little reverse research using the information in this book on Jonathan Rowley, Jr.  I knew Jonathan Jr. was born in East Haddam, CT, in 1729.  The next record I found for him was a land purchase in 1773, in Pittsford VT.  Where was Jonathan, Jr. during these forty four years?

Using the information on migration patterns in Mathews book, I discovered a migration pattern from eastern CT (East Haddam) to Western CT (Kent) to towns in the Berkshire Mountains migrating to Central and Northern Vermont. Can you guess where I went looking for Jonathan, Jr.? Yes, the Bershire Mountain area. It is from Richmond that Jonathan Jr. migrates to Vermont, just as the book says.