Battle Creek has been my home for the past 22 years. We moved to Battle Creek when my husband, Kirk, accepted a counseling position with the Lakeview School District. Living in Battle Creek, Michigan has many benefits. The one I enjoy the most is when the sweet smell of cereal wafts through the open windows of my kitchen. My daughter tells of the time her college town was smelling of soy. She was saying she didn't like the smell of it. Someone asked her "What does your town smell like?" She proudly replied, "Froot Loops!"

Battle Creek is known as "The Cereal City". It is firmly grounded in cereal making history. It is the world headquarters for the Kellogg Company. Kellogg's and Post both have cereal manufacturing plants in the city. In addition, the Kellogg name can be found on many landmarks.
So, I thought I would use the history of Battle Creek as a subject for future blog posts. Today, commemorates the 150th Birthday of W.K. Kellogg. Will Keith Kellogg was born 7 April 1860 in Battle Creek, Michigan. He was the seventh son born to John Preston Kellogg and Ann Janette Stanley. W.K. Kellogg married Ella Davis 3 November 1880. It was at this time that he went to work for the Battle Creek Sanitarium. It was here, in 1894, after a series of accidents he developed a wheat flake. From this discovery, a food empire was built. 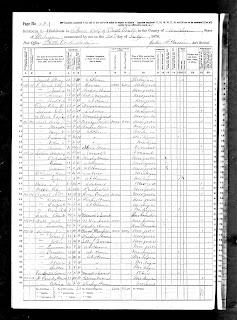 1870 U.S. Federal Census-The Kellogg Family
Battle Creek will be celebrating W. K. Kellogg's birth year with Sesquicentennial Events, held throughout the year. Battle Creek has a lot to thank W.K. Kellogg for and this is a wonderful tribute to someone who gave so much to Battle Creek and others. Check back for future posts on Battle Creek and Happy Birthday, Mr. Kellogg!