Using Military Newspapers in Your Research 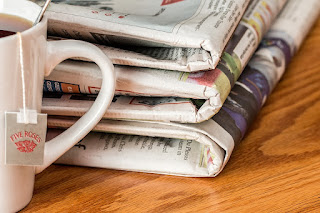 Newspapers are an excellent source for finding family history. One type of newspaper that you may not have thought of using is military newspapers. If one of your ancestors were stationed at a United States camp or fort, it might be worth your while to see if there was a newspaper published during the time your ancestor spent there. 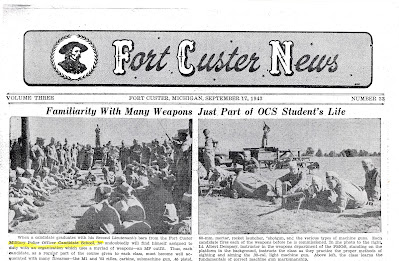 Fort Custer in Battle Creek, Calhoun, Michigan had a newspaper called, "Fort Custer News" A search at the Library of Congress for Fort Custer News provides information on the publication. The starting date is unknown. The earliest ones I have found at Fort Custer Historical Society Library is 1942.

The newspaper was edited and published by the personnel at Fort Custer.  The information provided in the newspapers states, "Published every Friday for officers and enlisted men of Fort Custer, Michigan, under the direction of the Post Special Service Office, and edited by personnel of this post. The Fort Custer News receives material supplied by Camp Newspaper Service, War Department, 205 East 42nd St., N.Y.C. Such credited material may not be republished without permission from Camp Newspaper Service. However, uncredited material herein contained is available for general release and reprint in other publications without further permission."

A staff of five was listed:

The 17 September 1943 issue was eight pages long. The types of articles in this edition included Fort Custer news, weddings, lists of men/women leaving for overseas from Fort Custer, nurse assignments to Fort Custer, ration reminders, soldier of the week, church services, list of places and where to find them on the Fort, service club activities, movie guide for Fort Custer's three theaters, regiment information, WAC activities, comics, and a sports page. 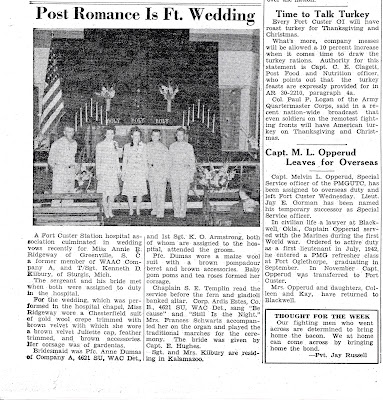 The majority of the news published had information pertinent to Fort Custer. Very little state or national news was included. The clipping above has a picture and article of the wedding of Miss Annie R. Ridgeway of Greenville, S.C. and T/Sgt Kenneth D. Killbury of Sturgis, Mi. The couple met when they were assigned to duty in the hospital on Fort Custer. Although I have no relation to the couple, I was thinking how exciting it would be to find this on one of my ancestors.

The other two articles in this clipping are "Time to Talk Turkey", which states that every Fort Custer GI will have roast turkey for Thanksgiving and Christmas. Also, that even soldiers on the remotest fighting fronts will have turkey too.

My dad remembered one Thanksgiving when they were dug in in the Ardennes Forest that each company in the front-lines were trucked back a few miles and served a turkey dinner with all the trimmings. The soldiers were used to "C" rations, mostly cold canned foods. He said most of the soldiers, including him, returned to their front-line fox holes and promptly regurgitated dinner due to its richness. He said he enjoyed it while he was eating it.

Another article, "Capt. M.L. Opperud Leaves for Overseas". The article reports that Capt. Melvin L. Opperud, Special Service Officer of PMGUTC has been assigned to overseas duty and left Fort Custer Wednesday. More information about the captain includes his work as a civilian, his service during WWI, and that his wife and daughter returned to Blackwell (Oklahoma). If this were your ancestor, wouldn't you love to find this article? 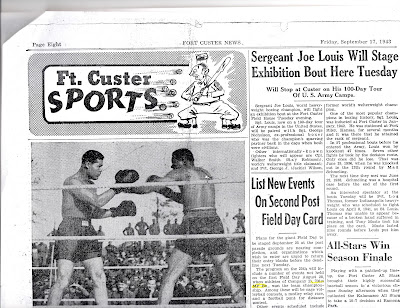 The last page of this edition was the Ft. Custer Sports page. The main article was about Sergeant Joe Louis staging an exhibition bout at Fort Custer. Other articles were about fishing, baseball standings, bowling season schedule, and a baseball tournament.

You could even send the newspaper home. There was a blank address label to fill in, attach a 1 1/2 cent stamp and mail it.

These historic newspapers aren't hard to find. I googled "Fort Custer News" newspaper and the first hit was the Library of Congress. The page is part of the Directory of US Newspapers in American Libraries collection. A cursory look at the titles includes more than military newspapers, but it is worth a search for your ancestor's fort, camp, or regiment.

At the bottom of the newspaper page is an area "Libraries That Have It". The Fort Custer News is available at the Library of Michigan and the University of Michigan. More information on the dates and issues for the newspaper is included.

What military newspaper are you looking for? I would love to find the 1945-1946 editions of Fort McClellan, Alabama newspaper, The McClellan Cycle. My dad was stationed there after the War in Europe was over. He coached a regimental basketball team to victory over the other regiments there. I have pictures and blogged about it, but I would love to see if there is an article about the tournament. Scattered issues are available at Alabama Department of Archives and History Library, Montgomery, Alabama. A research trip needs to be added to my list.

More than military information can be found in historic military newspapers from United States forts. Take a look, who knows what you will find about your ancestors.