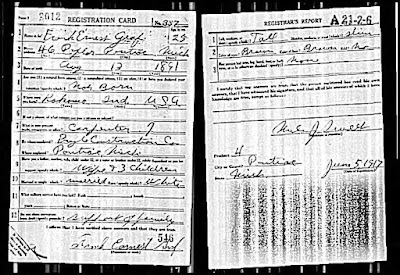 My great uncle, Frank Ernest Graf, was 25 years old when he filled out his World War I draft registration. Frank was the son of Valentine Graf and Nancy Mast. The information on his draft registration was substantiated by my research, with one exception, the number of children.

He was born 13 August 1891 in Kokomo, Howard, Indiana, United States. He was one of seven children who lived to adulthood. The family left Indiana and moved to Brethren Michigan around 1900.

In 1917, his occupation was a Carpenter in Pontiac, Michigan. He had a wife and three children at this time. If he signed the draft registration 5 June 1917, he had four children: Beulah, Garl, Richard, and Donald. Donald was born 2 May 1917. He may have forgotten about his six-week-old baby.